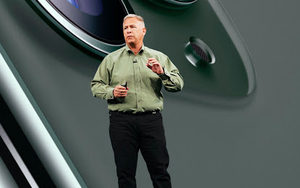 Phil Schiller, who started at Apple in 1987, left in 1993 and then returned in 1997 to help Steve Jobs resurrect the company after its bleak years in the mid-’90s, is stepping downas its chief marketing officer to become an Apple Fellow.

Greg Joswiak, a longtime deputy, will assume most of Schiller’s duties as senior vice president of worldwide marketing. Schiller will continue to oversee the App Store and the company’s events, reporting to CEO Tim Cook.

“This appears to be Schiller moving to a largely advisory role, with Apple employing some of its own marketing flourishes on the transition. Schiller’s maintenance of App Store messaging is interesting, especially as the company continues to be at the forefront of conversations around anti-competitive behavior among American tech companies,” Lucas Matney observes  for TechCrunch.

“The App Store has been criticized for its revenue share model on digital services and CEO Tim Cook recently Zoom-testified in front of the House Antitrust Committee alongside other Big Tech CEOs where the bulk of critiques levied at him by government officials seemed to focus on his handling of the App Store,” Matney continues.

“Some critics believe Apple’s enforcement of various rules in the App Store is overly restrictive, and others still claim the company’s policies and revenue share are anticompetitive. Apple -- often through interviews or statements given by Schiller himself -- has made the case that it has enacted and enforced its policies to ensure quality user experiences,” Samuel Axon explains for Ars Technica.

“In the announcement, Schiller notes that his new role is part of ‘planned changes’ as he turns 60, but added, ‘I'll keep working here as long as they will have me,’” Andrew Gebhart writes  for CNET.

“Schiller's most recent accomplishment as head of marketing was turning Apple’s popular annual developer conference, WWDC, into an all-digital affair  this summer,” he adds.

“Not much is known about Apple’s Fellow program, but it appears to honor those who have made extraordinary contributions to the field of computers. Apple cofounder Steve Wozniak lists himself as an Apple Fellow, as does early Apple employee and investor Guy Kawasaki,” Avery Hartmans writes  for Business Insider.

“Marketing is a huge role inside of Apple that goes beyond simply advertising products, so this marks a significant change within the company. As Apple puts it, the marketing division is ‘responsible for Apple’s product management and product marketing, developer relations, market research, business management, as well as education, enterprise, and international marketing,’” Jacob Kastrenakes observes  for The Verge.

Indeed, “Schiller’s title as head of marketing was, in some ways, an understatement for his actual role at the company. The Apple executive was involved in the conception and design of the company’s most important products, including the iPhone and iPad, working closely with Steve Jobs, [former head of design Jony] Ive and Scott Forstall, the former head of software,” Davey Alba and Brian X. Chen write  for The New York Times.

Joswiak, 56, known as “Joz,” “another longtime Apple veteran known for his gregariousness, oversaw marketing for the iPhone and the iPod. He has worked more often behind the scenes, giving presentations of new products to media professionals. He made few onstage appearances but became more actively involved in events over the last few years,” Alba and Chen continue.

“What makes Schiller so great?” Devin Pallone asked in a 2016 post on Business 2 Community.

“For starters, he isn’t afraid to troll the Twitterverse and school users on the proper pluralization of Apple products. (In case you were wondering, it’s ‘I have two iPhone devices,’ not ‘I have two iPhones.’) Phil Schiller is a walking, talking example of what it takes to master marketing, and we should all take a page from his book.”

He was also the only CMO among the 50 without a LinkedIn account, and he does not have one now.