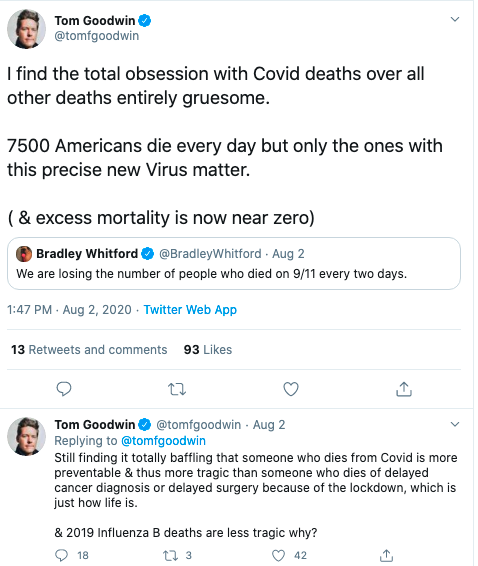 Tom Goodwin, who rose fast as an ad industry media futurist based largely on his provocative views about society, the ad biz, and the future of, well, everything, fell victim to his POV this week, losing his job as head of futures and insight at Publicis Groupe.

Goodwin, a vociferous and provocative tweeter, was removed following a series of controversial tweets expressing his personal views that society has been overplaying the magnitude and importance of COVID-19 deaths. While Goodwin is not alone in that belief -- publisher Bob Guccione Jr. expressed a similar point-of-view in a MediaPost op-ed published April 3 -- the controversy apparently was too much for Publicis.

"I find the total obsession with Covid deaths over all other deaths entirely gruesome," Goodwin tweeted on Sunday, adding, "7500 Americans die every day but only the ones with this precise new Virus matter."

Goodwin went on to draw comparisons with other tragic deaths caused by suicide, cancer and other potentially treatable and/or preventible forms of death, but the tweets kicked up a backlash and a firestorm that ultimately led to his dismissal, even after a subsequent tweeting noting:

"Time to repeat that I'm not a voice of Publicis This thread is just me, not representative of a Publicis POV Apparently I've been quote tweeted, then blocked So can't see any of the Tweet, or what emerged, or reply-I'm sure I'd be apologizing Not a victim, just being pragmatic."

The incident reveals a lot about cancel culture, as well as the blurring and overlapping lines between personal and professional views, especially with regard to social media.

As someone who personally rants my political perspectives on Twitter, I constantly have to remind people that I am expressing my own POV, not MediaPost's, and that journalists -- or even ad industry media futurists -- are entitled to their own beliefs and have the right to express them in a free and open society.

I have no idea of Goodwin's deal with Publicis included any kind of morals clause or gag order, but it would be ironic given that his role has largely been one intended to provoke people into new ways of thinking in order to change the status quo.

I haven't always agreed with Goodwin, or people like Guccione, but I respect their right to express it, and whenever possible, have even given them a platform for doing so.

I met Goodwin early in his ad industry ascendency, when he was a consultant looking for a new agency gig, and we gave him one as a regular contributor to MediaPost commentaries, as well as on stage at our events.

Goodwin has since exploded into a cottage industry of his own, becoming a renowned conference speaker, creating his own anti-bureau speakers bureau, publishing books and kick-starting other ventures.

Another smart agency holding company -- or an even smarter independent -- should grab him quickly, if he's still in the market for that sort of thing. In the meantime, I'll continue to follow him on Twitter and other places, because I for one value his contrarian point-of-view.