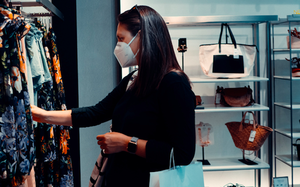 It’s not news that the pandemic is inspiring all kinds of new consumer behavior, but a new report from McKinsey finds these changes are more widespread, with 46% of American consumers saying they’ve switched brands or made purchases with a new retailer.

More than a third of all shoppers say that instead of helping them navigate new choices, retailers are failing to offer even the most primitive digital tools to make their lives easier.

The report is based on research from Periscope, McKinsey’s marketing and sales analytics division. It finds that 35% of U.S. shoppers say they’ve had zero exposure to basic in-store technologies, including digital screen browsing at kiosks or mobile or contactless payments.

The biggest motivation for trying a new brand or store? Most (51%) say they are looking for better prices. And 27% say they were looking for retailers that seem supportive of employees during the pandemic.

Online, they’re craving speed: The ability to find what they’re looking for quickly and easily mattered most to 65% of respondents. That’s an 11% gain from the ongoing survey’s March results.

“This could be a once-in-a-generation opportunity because so many shoppers are switching,” says Brian Ruwadi, global leader of Periscope. “And now both brands and retailers have to figure out how to make sure people stick with them as the crisis eases.” Hanging on, he says, will come down to those that can make shopping as smooth as possible.

He believes many changes will be lasting. “It’s comparable to people’s adoption of private-label products,” he says. “In every economic downturn since 2000, more people try them. And a certain percentage stick with them.”

Shoppers are clear about what they want, with mobile payments topping the list at 30%, the ability to order via app, 28%, and apps for scanning barcodes, at 25%.

“There are pretty significant changes in what consumers care about in the shopping experience,” Ruwadi tells Marketing Daily. “Online, they want to learn about the product fast and understand it from clear descriptions. And in stores, they want to get in and out quickly and safely, with easy navigation.”

And while many retailers can -- and in fact, already are -- adapting to these shifts, he expects the number of retail bankruptcies to continue in the months ahead.

“Many retailers were in trouble even before this crisis. They are trying very hard,” he says. “It’s not just adapting to the supply chain challenges, but also at the same time redefining who they are. Many have to look for entirely new value propositions. So yes, I think we’ll see more issues and bankruptcies ahead.”