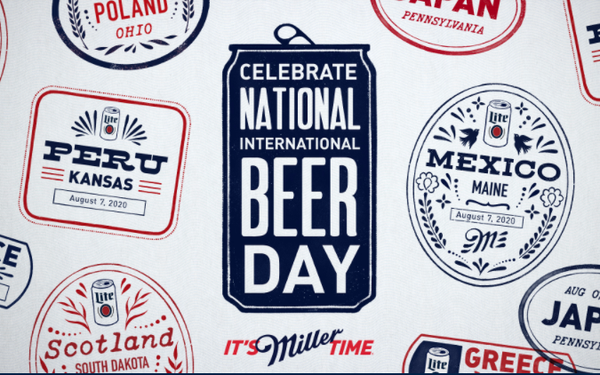 If you can’t travel to some faraway nation, but live in a place with the same name -- like Japan, Pennsylvania or Greece, New York -- Miller Lite has a free-beer deal for you.

The offer comes from Miller Lite, the Molson Coors Beverage Co, brand, just in time for International Beer Day, which is Friday.

People who live in 80 U.S. cities, or 118 or so corresponding Zip codes, can purchase a six-pack of Miller Lite on Friday, and send the receipt to the brewer for a rebate. People who want to participate have to be legal drinking age.

This could be good news for residents of Malta, in Idaho, Illinois, Montana, New York and Ohio -- and other countries well represented in this country by cities. There are five Denmarks, five Panamas and nine Lebanons, among the nation-cities Miller Lite is showing a good time.

"We know that summer travel looks a little different this year, and for many beer fans, that means celebrating International Beer Day looks different too," said Sofia Colucci, vice president of the Miller family of brands, in a statement. "But it's still time for Miller Time, so we're embracing the chance to celebrate safely and with good friends on our home turf, in cities like China, MI; Belgium, IL; and Trinidad, CA."

Other beers have used folksy, quirky  promotions that at least get them earned media from radio show hosts to local newscasts. In January, Busch beer offered discounts of $1 per every inch of snow that fell in a handful of snowy Midwestern cities like Fargo, North Dakota and Green Bay, Wisconsin.

The official list  from Miller Lite also includes four places named Scotland, but only one, in Scotland, South Dakota., where a Miller Lite semi-truck will hand-deliver cans of beer to legal-age drinkers (maybe all of them) on Friday. The U.S. Census in 2019 estimated there are 804 residents of Scotland, which was laid out in 1879 by proud Scottish immigrants who evidently didn’t want to waste much time thinking of what to call it.

Miller Lite is only recognizing places in 30 out of the 50 states and not including some big states, including Florida (sorry, Panama City) or Texas, which is depriving China Grove and possibly Iraan (which was actually "named for Ira and Ann Yates, owners of the ranch land upon which the town was built," according to Wikipedia).

A spokeswoman for Miller Lite explained that some states limit or prohibit giveaways of alcoholic products.