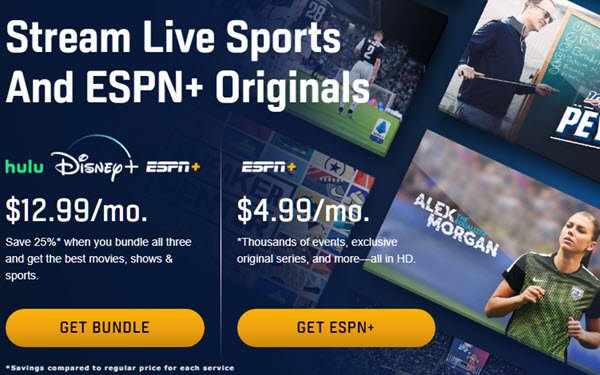 Disney will raise the monthly fee for new subscriptions to ESPN+ from $4.99 to $5.99 starting August 12.

Existing subscribers won’t be hit with the monthly fee increase for a year.

In addition, the price for an annual subscription will remain at $49.99.

ESPN+ is also available as part of a bundle with Disney+ and Hulu, priced at $12.99 per month.

The price hike — the first since the streaming sports service launched in April 2018 — comes as some pro sports offered on ESPN+, including Major League Baseball and the National Hockey League, are resuming play after pandemic-forced suspensions.

It also comes after Disney reported last week, in its third-quarter earnings call, that ESPN+’s subscriptions rose by a solid 600,000 versus the previous quarter, to 8.5 million.

That contributed to 2% revenue growth in Disney’s direct-to-consumer and international division (DTCI) — a positive amid the company’s major pandemic-driven losses in most of its businesses.

However, Disney also reported that ESPN+’s average monthly revenue per paid subscriber had declined from $5.33 to $4.18 due to the uptake on the lower-priced bundle and decreased ad revenue resulting from lower ad budgets and diversions of ad money to non-sports platforms.