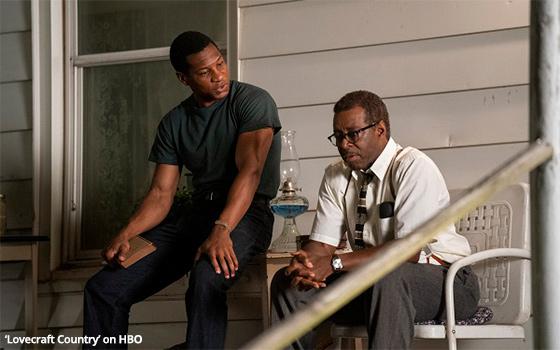 Among the compliments one can pay to the new HBO series “Lovecraft Country” is that it is not the same old thing.

It is a 1950s race story with elements of horror and science fiction. Quick -- name another TV series, ever, that you would describe that way.

As the description above might indicate, “Lovecraft Country” takes more explaining than most other TV shows too.

The Lovecraft in the title refers to H.P. Lovecraft (1890-1937), author of a collection of fiction encompassing aspects of horror, science fiction and the offbeat. In the decades since his death, many have discovered his books.

Forgive me, but I have not ever read H.P. Lovecraft and know very little about the man or his work.

But that was not an obstacle to becoming absorbed in the first episode of “Lovecraft Country.”

However, if one is familiar with Lovecraft and other authors of science- and fantasy fiction, then an enhanced experience awaits you because this TV show is dotted with references to sci-fi authors and the stories they wrote.

Specifically, the TV series is not adapted directly from any Lovecraft fiction, but from a novel by Matt Ruff called “Lovecraft Country” that is influenced by Lovecraft’s work. To simplify the concept here: Weird things happen to the people in “Lovecraft Country.”

They’re on a road trip through a great swath of 1950s America to find Atticus’ father. On the way, they have a series of adventures -- mainly in the form of encounters with racist townsfolk and law-enforcement personnel who threaten their lives.

This TV series is nothing if not literary, starting with the character that stands out from the three as the show’s central figure -- Atticus Freeman.

His very name represents a plea for racial justice: “Atticus” from Atticus Finch in "To Kill a Mockingbird” and “Freeman,” which is self-evident.

The journey Atticus is on is classic hero-cycle stuff. It is a journey of discovery on the way to a specific goal (in this case, reuniting with his father in order to understand his own origin story), during which a series of obstacles must be overcome.

The TV Blog frequently decries a lack of originality, or a pervasive sameness, among the scripted TV shows of the current era.

In that context, the highly original “Lovecraft Country” emerges as a very welcome change.