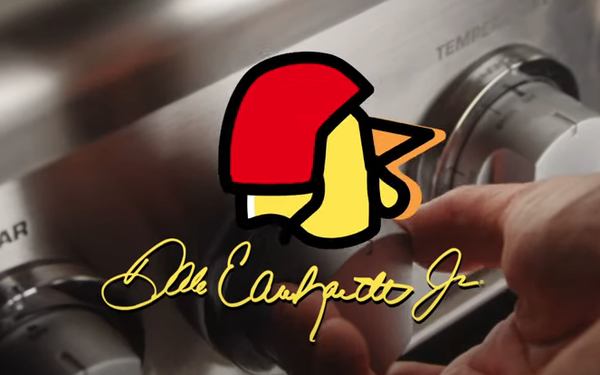 The voice of the 26-time NASCAR Cup Series winner is front and center in a new campaign titled “It’s Bo Time.”

In a 30-second spot from the EP+Co agency titled “Tick Tick Boom,” Earnhardt describes Bojangles food as “like a powder keg in your mouth.” Accompanying visuals show fried chicken, biscuits, macaroni and cheese and sweet tea before he adds, “when it comes to down-home cooking, it’s not our first rodeo.”

The selection of Earnhardt selection stemmed from an impromptu meeting between the race car driver last September with Jose Armario—who had joined Bojangles as CEO in January of 2019—at the Bojangles Southern 500 race in Darlington, S.C.

“They met at the truck parade on a Saturday night and really hit it off,” Bojangles CMO Jackie Woodward tells Marketing Daily. “We started getting to know Dale and his team last fall as a result of that meeting.”

At the time, the 10-state restaurant chain was already contemplating a new look for its logo, packaging and in-store visuals, along with an advertising campaign.

“The more we talked, we just realized these are two modern Southern brands that have a lot in common. We share a lot of fans and customers. Dale was just a natural choice.”

The chain’s brand refresh omits the apostrophe at the end of Bojangles because it “had become a bit superfluous,” explains Woodward, who joined the company last year from Krispy Kreme Doughnuts, where she was global CMO.

The new campaign is running on regional broadcast, cable and OTT television, paid social, digital display ads and terrestrial radio. “We are not in any streaming radio at this moment, but never say never,” Woodward adds.

She describes Bojangles patrons as people who “appreciate great flavor, not only in food but in life” and who seek “great value for their money. Like many of our fast food competitors, our customers may be on a budget.”

A third point of differentiation, according to Woodward, is “how important family is to our customers.”