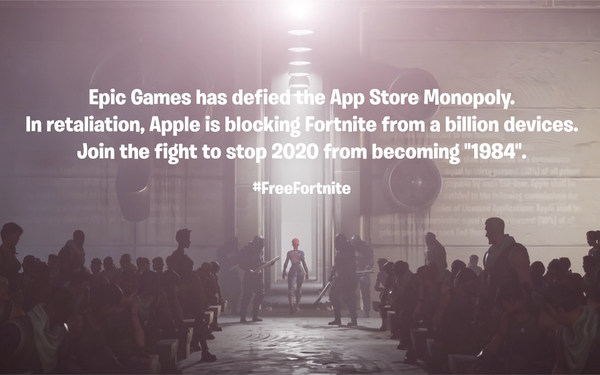 Epic Games is suing Apple for removing Fortnite from the App Store, the gaming giant announced on Thursday.

“Apple has become what it once railed against: the behemoth seeking to control markets, block competition and stifle innovation,” the lawsuit claims.

In the complaint, Epic Games accuses Apple of “anti-competitive restraints and monopolistic practices in markets for the distribution of software applications to users of mobile computing devices like smartphones and tablets, and the processing of consumers’ payments for digital content used withini OS mobile apps.”

Hours before filing the complaint, Epic implemented its own payment processing system on the iOS version of Fortnite -- a clear violation of the App Store’s rules.

In response, Apple quickly removed the blockbuster game from the App Store.

“Today, Epic Games took the unfortunate step of violating the App Store guidelines that are applied equally to every developer and designed to keep the store safe for our users,” Apple stated.

Playing up Epic’s battle with Apple, Fortnite is treating players to a parody of Apple’s famous 1984 TV spot, which it’s calling “Nineteen Eighty-Fortnite.”

“Epic Games has defied the App Store Monopoly,” copy within the video parody reads. “In retaliation, Apple is blocking Fortnite from a billion devices. Join the fight to stop 2020 from becoming ’1984.′”

Perhaps prompting Epic’s one-two punch, app developers and lawmakers have recently expressed their displeasure with the 30% share of in-app subscriptions Apple takes during an app’s first year in the App Store. (After a year, Apple takes a 15% cut of subscription revenue.)

The European Commission also announced antitrust probes into the business practices of Apple’s App Store and Apple Pay in June.