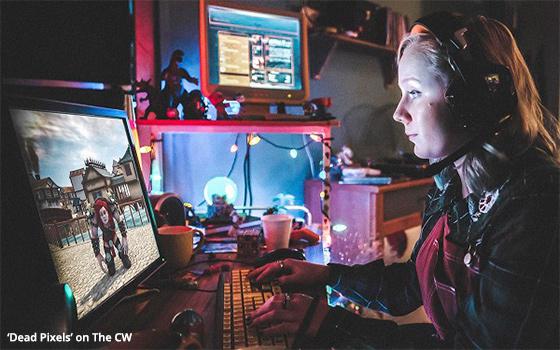 English television content is slowly but surely adopting some of the worst traits of American TV, as this new comedy series premiering this week on The CW demonstrates.

The show is called “Dead Pixels,” and it is purportedly about a group of socially awkward 20-something friends in the U.K. who have developed an affection -- if not an addiction -- for a shared online video game called “Kingdom Scrolls.”

The show is supposed to be about their sad, dead-end lives as low-level office-workers. But at least where this week’s premiere episode is concerned, the show is really about one woman’s vagina.

This kind of subject matter is old hat by now in American sitcoms, but to hear it in a comedy imported from the U.K. represents something new.

In “Dead Pixels,” the first mention of this woman’s obsession (yes, even more than her apparent obsession with this fictional video game) comes just after two minutes into the episode, and the subject then never ceases to be talked about.

Some of the dialogue is delivered in her workplace within earshot of others. It should go without saying, but in today’s world this kind of talk in the workplace is so socially unacceptable (indeed, it is a fireable offense) that TV shows positioned as satires of real-life situations should avoid it.

The dialogue about sex and this woman’s vagina is in fact so graphic that one wonders how on Earth this show ended up on The CW, which is a network aimed at teens (both young and old) along with young adults.

This show would appear to be so out of sync with the rest of the content on The CW that you have to wonder if anyone at The CW bothered to watch it before blithely deciding to put it on TV.

That decision, whether rendered consciously or not, hints at desperation. Not only is this show wholly unsuited to The CW, it is an import from England that is more than a year old.

Perhaps due to the restrictions on U.S. TV production arising from the COVID-19 pandemic, The CW had to look elsewhere for content. So, it picked up a year-old comedy that had not been seen here yet.

The show is atrocious, and might in fact be the first half-hour comedy ever aired on The CW, which specializes almost exclusively in hour-long series. And if it is not the first CW comedy, then it is the first one seen on the network in a very great while.

Well, if this show is any indication of where The CW wishes to go with TV comedy, then it needn’t have bothered. “Dead Pixels” is dead on arrival.