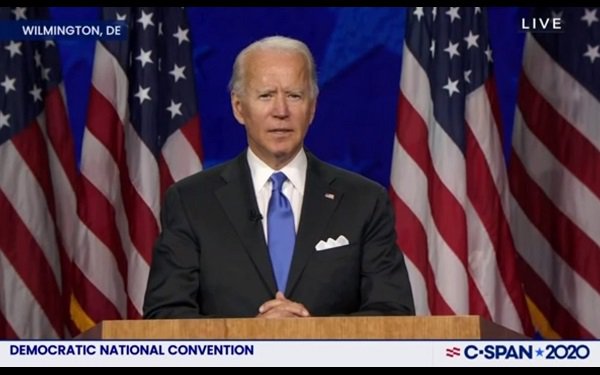 With an emphasis on the candidate’s ties to ordinary Americans, Thursday night’s two-hour final episode of this week’s virtual Democratic Convention show was devoted entirely to the party’s nominee, Joe Biden.

Turning over the entire final evening of a political convention to the nominee -- leading up to his (or her) acceptance speech -- is traditional for conventions in the television era.

But this year’s convention was anything but traditional. Instead, the event’s planners were challenged to use the medium of television in new ways to produce a two-hour tribute to their nominee that was not based inside an arena full of cheering Democrats.

In this regard, one of the most effective segments in the two-hour show was the Zoom-like meeting chaired by former presidential candidate Cory Booker in which he was seen talking to other former Democratic hopefuls who all shared fond memories and anecdotes about Joe Biden.

This was a great way to choreograph an image of party unity following the bruising primary campaign and series of debates in which some of these very candidates took direct aim at the former vice president.

On Thursday night, however, these former Biden rivals were all gracious and united in their support of him. A viewer watching at home could be persuaded that their affection was not an act.

The candidate himself came on strong in his acceptance speech. Biden, 77, looked and sounded vigorous. And he made it through the entire speech without the gaffes or lapses that sometimes bedevil him in public appearances.

Throughout the night, the convention show portrayed the former vice president as a man of the people.

Much was made of his humble, working-class origins, his boyhood difficulties with stuttering, the tragic deaths of loved ones throughout his life, and the attention he pays to ordinary people he meets in the course of this working life.

So many phone calls to people’s grandmothers! Where does he find the time? These kinds of stories came up repeatedly on Thursday night and all week long too.

The rest of the evening featured musical performances such as the pairing of John Legend and rapper Common backed by a choir, and the band formerly known as the Dixie Chicks singing “The Star-Spangled Banner.”

In June, they dropped the word “Dixie” from their band’s name, shortening it to just The Chicks. This begs the question: Will Dixie Cups become just The Cups someday soon?

At least twice during the telecast, cute kids threatened to steal the show. One was the young son of Louisiana Rep. Cedric Richmond -- Cedric Richmond Jr. -- who recited the Pledge of Allegiance earlier in the evening. It was possibly the most heartwarming moment of the entire week.

The other kids were the two daughters of NBA star Stephen Curry and wife Ayesha. The girls appeared with their parents in a segment endorsing the Biden-Harris ticket. If some governing body existed that identifies the world’s most beautiful family, the Currys would probably be the one.

Perhaps the evening’s biggest misstep was the enlisting of the decidedly charmless Julia Louis-Dreyfus as the night’s celebrity host. She seemed to have been chosen simply because she played a vice president on TV in the HBO comedy “Veep.”

She was given a series of throwaway lines to recite that were supposed to be comedic shots at President Trump. But in the role of stand-up comedian, she bombed like an amateur on an open-mic night.