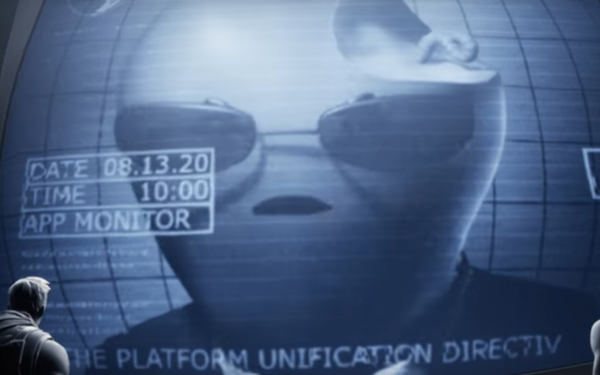 A scene from Epic's parody of Apple’s famous "1984" television ad.

Epic Games filed federal antitrust suits against Apple and Google in California yesterday after they removed the blockbuster video game “Fortnite” from their online stores after Epic installed a direct payment mechanism on the app. The game had more than 350 million registered players as of May.

“Apple and Google both take a 30% cut from in-app revenue purchases in games, which has long been a sore spot with developers,” the AP’s Mae Anderson explains.

“Fortnite is free, but users can pay for in-game accoutrements like weapons and skins. Its developer, Epic Games, said in a blog post Thursday that it was introducing Epic Direct payments, a direct payment plan for Apple’s iOS and Google Play. Epic said the system is the same payment system it already uses to process payments on PC and Mac computers and Android phones,” Anderson continues.

Epic is offering a permanent 20% discount on “Fortnite’”s in-game currency if players purchase directly from Epic. It said players could not get the discount if they paid via Apple or Google, Brian Fung and Shannon Liao report  for CNN Business.

“Currently, when using Apple and Google payment options, Apple and Google collect a 30% fee, and the up to 20% price drop does not apply. If Apple or Google lower their fees on payments in the future, Epic will pass along the savings to you,” Epic posted.

“Epic also attacked Apple on social media, launching a campaign with the hashtag #FreeFortnite, urging players to seek refunds from Apple if they lose access to the game, and creating a parody  of Apple’s famous ‘1984’ television ad,” Reuters’ Stephen Nellis and Munsif Vengattil report.

“In the parody, which quickly garnered hundreds of thousands of views, a female Fortnite fighter hurls a unicorn-shaped club to smash a screen on which an Apple-headed character speaks of ‘the anniversary of the platform unification directives,’” they write.

Clearly this was not a spontaneous decision on Epic’s part, and Apple and Google must have seen it coming.

The complaints “ran to 60 pages each, and one of the lawyers involved is Christine Varney, who ran the Justice Department's antitrust division during the Obama administration,” Fung and Liao write.

“‘Apple is bigger, more powerful, more entrenched and more pernicious than monopolies of yesteryear,’ Epic says in the suit. ‘Apple's size and reach far exceeds that of any technology monopolist in history.’

“Epic’s lawsuit against Google accuses the tech giant of abandoning its idealistic roots and says Android’s claim that it’s an open ecosystem is a ‘broken promise,” they add.

Both Apple and Google issued statements.

Apple “said it will work with Epic to help bring Fortnite back to the App Store,” Brett Molina and Mike Snider write for USA Today.

“‘Epic agreed to the App Store terms and guidelines freely and we’re glad they’ve built such a successful business on the App Store,’ reads Apple's statement. ‘The fact that their business interests now lead them to push for a special arrangement does not change the fact that these guidelines create a level playing field for all developers and make the store safe for all users,’” Molina and Snider continue.

“A Google spokesperson emphasized to The Verge that Android is an open ecosystem that allows multiple stores and that Google Play’s policies need to apply equally to all developers. It has no problem with those other stores existing nor with Epic distributing its game on them, the spokesperson said,” Dieter Bohn writes  for The Verge.

“Chris Sagers, a law professor at Cleveland State University and author of United States v. Apple: Competition in America, believes the case could have huge implications for antitrust law. Not only has Epic Games enlisted powerhouse antitrust lawyers, including a former U.S. assistant attorney general in the Justice Department’s antitrust division under Barack Obama; the suit also comes at a time when scrutiny of tech giants’ market power is at an all-time high,” Cecilia D’Anastasio writes  for Wired.

“In late July, Apple CEO Tim Cook joined the CEOs of Amazon, Microsoft, and Google to testify before Congress about potentially anticompetitive behavior. The questions directed at Cook largely focused on the App Store,” D’Anastasio adds.

“Suing Apple, in particular, serves two goals for Epic: winning in legal court and winning in the court of public opinion, said Rebecca Haw Allensworth, a professor of antitrust at Vanderbilt Law School. Epic is more likely to succeed in the latter, she said,” Jack Nicas, Kellen Browning and Erin Griffith write  for The New York Times.

“‘There is growing business pressure against Apple, she said, noting an antitrust case would be more complicated and difficult to win.”

With more than 350 registered users on your side, it’s hard to lose in the court of public opinion.