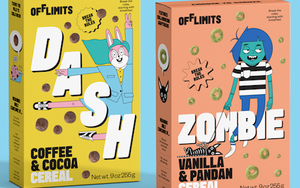 Coming soon to a breakfast table near you: OffLimits cereals, whose Dash and Zombie variations are represented by “emotionally unstable” characters.

OffLimits is the brainchild of Emily Elyse Miller, the author of “Breakfast: The Cookbook.”

Along with OffLimits COO Michelle Lora—who led product collaborations at Liberty of London and Swarovski—Miller considers cereal to be a “vehicle for culture.”

Dash—represented by on-the-go character Dash, described as “your over-achieving, basic-bitch bunny”—mixes organic ingredients with ground coffee and cocoa. Add a splash of milk and you’ve got cold brew.

Zombie is more laid-back and likely to “choose to snooze.” He’s into eating cereal all day long and prefers that it contain stress-relieving adaptogens like ashwagandha.

In this interview, Miller and Lora talk about the origins of OffLimits and why they unleashed the Dash and Zombies personas on the world.

CPG FYI: Why is cereal a product of culture?

Miller: It’s one of the few CPG products that embraces things like art, design, mascots and characters on the packages. Cereal was probably one of the first types of foods to use licensed characters from TV shows, comic books and athletes—like the Wheaties boxes.

I started this because I felt like culture had shifted to such a point that it hasn’t been represented in the cereal market yet.

Miller: It’s playful, but it’s also kind of opening a dialogue about mental health in general. By saying emotionally unstable, I mean that these characters are not just one-note. They’re not what you’ve seen in cereal mascots of the past that are always happy or marketed to kids or running around doing the same things.

CPG FYI: How would you describe your target audience?

Lora: Dash is most likely targeting millennials who’ve been in the workforce, who already have suffered some hard career choices—and that comes with some serious anxiety about always being perfect.

Zombie is a bit younger, in the sense that he most likely lives with his parents and is hyper-focused on all things virtual reality, which means he’s really into video games. Zombie also suffers from some emotional turmoil, but it’s different from Dash’s, [which is more] about social anxiety…Zombie doesn’t really do many things.

CPG FYI: Have you gotten any pushback on the characters?

Miller: We just launched, so we haven’t really given everyone a chance to hate us yet. Through these emotions, through some of the political chances that we take with these characters and with the brands, we are very prepared and ready to open a dialogue.

CPG FYI: Two nine-ounce boxes of Dash or Zombie cost $24. Would you consider them premium products?

Lora: We definitely would be considered a premium cereal, not just because of the price point but also because of the ingredients. We try to stick to organics everywhere possible and anywhere necessary. Some of the added functionality—like ashwagandha and the adaptogens that we use for Zombie—are premium ingredients. The coffee portion of Dash comes from Intelligentsia, which is a premium brand.

CPG FYI: Tell us about your pre-launch event in February, just prior to the lockdowns that would follow because of COVID-19.

Lora: It was in Los Angeles at the Subliminal Projects gallery, which is run by Shepard Fairey’s Studio Number One creative agency. It was called Break The Rules. While everybody was selling artwork, hanging out and listening to music, we had our cereal out on display—almost like artwork, but also available for anyone who visited the show to taste. It helped to generate an organic following.

CPG FYI: Besides your own website, will you be selling on Amazon?

Lora: We look at our retail outlets as partnerships, so I don’t see Amazon happening any time this year. We want to be where our consumers want us to be. We’re not trying to sell cereal in every store. Intelligentsia is not only our ingredient partner for Dash but also our retail partner. We are selling mini boxes, which is a single serve size of both Dash and Zombie, at Intelligentsia coffee bar locations that are open during the pandemic.