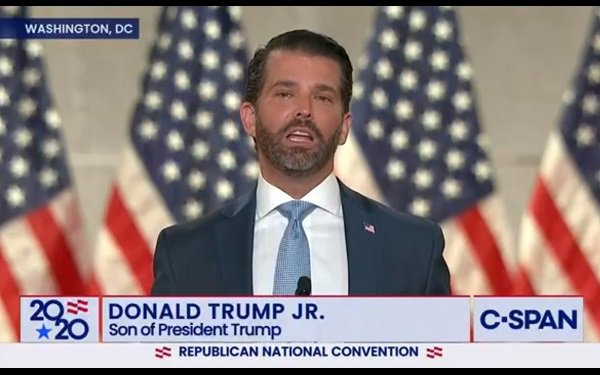 In the first-night kickoff to this week's four-night GOP virtual convention, the Republicans had a stark message: It is either us or them.

“Them” referred to the Democrats, under whose stewardship the United States would descend into anarchy, according to the words and imagery that were delivered over the three-hour-plus first night of the televised, virtual Republican National Convention Monday night.

As expected by many, the GOP is positioning itself going into November's elections as the law-and-order brand. That effort got underway in earnest Monday night on TV.

“Democrats won't let you go to church, but they'll let you protest,” said Republican Rep. Jim Jordan of Ohio, one of dozens of speakers seen on the convention telecast Monday night.

Those words were echoed by others throughout the evening. “This election is shaping up to be church, work and school vs. rioting, looting, and vandalism, or in the words of Biden and the Democrats, peaceful protesting,” said Donald Trump Jr., who spoke near the tail end of the evening.

The president's son seemed to be positioned as the evening's attack dog and stand-in for his father as he called Joe Biden “Beijing Biden” and described Donald Trump Sr.'s Democratic opponent as “the Loch Ness Monster of the [Washington] swamp.”

Speaker after speaker framed the contest between Trump and Biden as a fight for the soul of America.

The election was even positioned by some speakers as the most important since 1860 -- the year Abraham Lincoln was elected just before the nation cracked in half and fought the Civil War.

The statements made by multiple speakers were nothing if not dramatic. Donald Trump is no less than “the bodyguard of Western civilization,” said one of them, Republican activist Charlie Kirk, 26, who heads an organization called Turning Point USA.

“I am here tonight to tell you -- to warn you -- that this election is a decision between preserving America as we know it and eliminating everything that we love,” Kirk said dramatically.

A video that attacked Biden and the Democrats was played at least twice during the evening. The video featured menacing photo montages of Biden along with New York Rep. Alexandria Ocasio-Cortez, Michigan Rep. Ilhan Omar and Bernie Sanders as a female voiceover issued this warning: “In Joe Biden’s America, the radical left gets whatever they want, and you get to pay for it.”

Some of the evening’s most effective and authoritative speakers were former South Carolina Gov. Nikki Haley, the daughter of Indian Sikh immigrants; Sen. Tom Scott of Georgia; and Georgia legislator Vernon Jones.

Scott and Jones are both African-Americans who support Trump, with Jones being the most surprising of the two because he happens to be a Democrat. Scott is a Republican.

Among the surprise speakers who turned up during the Monday night GOP show were St. Louis couple Mark and Patricia McCloskey, who famously showed up armed on the front lawn of their suburban home in late June as Black Lives Matter protestors marched past.

The couple were later charged with “unlawful use of a gun” (basically, the way they waved their guns toward the marchers in a threatening manner). Their story became a national symbol for the “us vs. them” theme that was adopted Monday night by the GOP.

In their joint remarks Monday night during the virtual GOP convention, the McCloskeys warned that Democrats aimed to strip Americans of their Second Amendment rights -- a theme that also recurred during the evening.

For his part, President Trump made several appearances throughout the evening. After all, when you get right down to it, the election is more of a referendum on him than a fight for “the soul of America.”