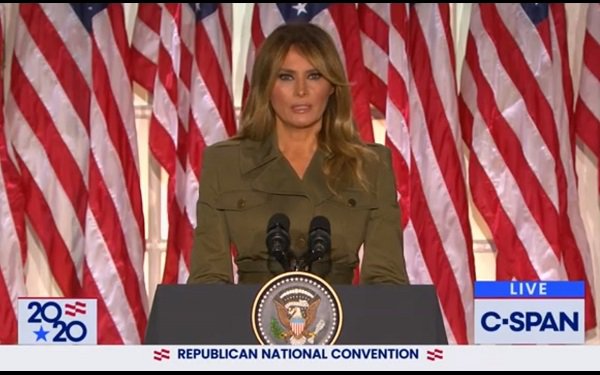 The White House and its Rose Garden featured prominently in Tuesday night’s episode of this week’s virtual Republican National Convention.

Before, during and after the prime-time telecast, critics fumed that President Trump and the Republicans were making a grievous break with tradition and protocol by using the White House and its grounds as backdrops for the president’s reelection campaign.

Some commentators raised the possibility that the use of government property such as the White House and its gardens and lawns for this kind of promotional purpose violated the law. Democratic members of Congress vowed to investigate.

Needless to say, the White House looked great on television. At several points during the three-hour-plus telecast, President Trump was seen conducting presidential business inside the executive mansion.

In one scene, he presented a former convict and felon, Jon Ponder, with a full presidential pardon in recognition of Ponder’s work with other former inmates.

Ponder, an African-American, founded an organization called Hope for Prisoners that helps former inmates re-enter society. “We live in a nation of second chances,” Ponder said during the GOP show Tuesday night as he endorsed Trump for reelection.

In another scene, Trump appeared in the White House attending a swearing-in ceremony for five new American citizens from countries ranging from Ghana to India. On TV, the scene was heartwarming.

The evening’s most prominent use of the White House property in Trump’s reelection effort Tuesday night was the speech delivered by his wife, First Lady Melania Trump, from the White House Rose Garden.

Just days earlier, the Rose Garden completed a major renovation under the First Lady’s supervision. On Tuesday night, it was transformed into an outdoor stage set, complete with strategic lighting and a small audience seated on socially distanced folding chairs.

The First Lady made a dramatic entrance striding toward her podium down a long portico, and wearing an ensemble whose olive-drab color and other features made her look almost military.

Her speech was positioned as the grand finale of the evening. Not surprisingly, she delivered a ringing endorsement in support of her husband’s reelection campaign.

She was one of three Trump family members to speak Tuesday night. The others were Trump’s son, Eric Trump, and daughter Tiffany Trump.

“Celebrating America as the land of opportunity” was the theme for Tuesday’s second night of this week’s four-night GOP convention miniseries.

The lineup of speakers included ordinary Americans with family-run businesses who all said they have prospered from President Trump’s economic policies -- a dairy farmer from northern Wisconsin, a lobster fisherman from Maine, a metal-shop owner also from Wisconsin, and others.

The majority of speeches and segments Tuesday night were produced and choreographed to come across as hopeful and optimistic.

One jarring exception was the speech delivered by Abby Johnson, a former long-time employee of Planned Parenthood turned anti-abortion activist who gave a very graphic description of the nature of abortions she said she witnessed.

The speech that took the most direct aim at Joe Biden was the one delivered by Pam Bondi, one-time Republican attorney general of Florida, who accused Biden of making deals in Ukraine and China for the financial benefit of his family when he was vice president.

At one point while watching the Tuesday night GOP show, I wrote in my notes: “This is one slick, polished production.” So was the Democratic show last week.

This thought occurred to me: We are all calling these events “conventions,” but they are not really conventions at all.

Conventions, whether political or industrial, are events in which thousands of people gather in a single spot to network, schmooze and close deals.

The two political “conventions” this summer are more like infomercials. They are long-form advertising and, as such, they are proving more effective and persuasive than mere conventions ever were.