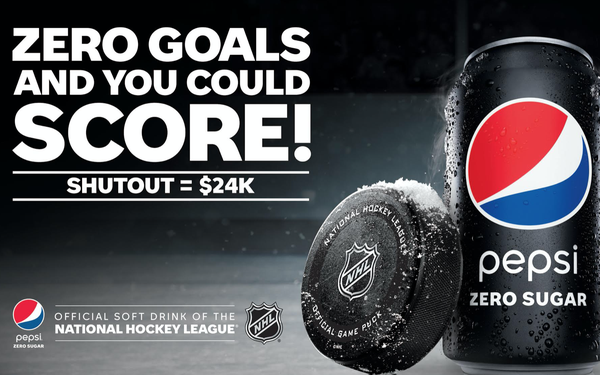 Some are Canada only (Tim Horton’s, Nestle Canada and Budweiser) while others are launching efforts in both the U.S. and Canada, including Pepsi and Little Caesars pizza.

Sweepstakes are dominating efforts this year.

Honda is supporting the NHL’s 50/50 sweepstakes platform.  This program will benefit the Boys and Girls Clubs of America and Boys & Girls Club of Canada as well as a winning fan. The platform will have extensions across NHL social, digital and NBC Sports.

MassMutual is once again hosting a sweepstakes seeking the Most Valuable Hockey Family. The contest recognizes outstanding parents, guardians, and mentors in hockey.

The NHL Hat Trick Challenge presented by Enterprise returns by introducing a new period for the Stanley Cup Qualifiers that includes a reset in standings, new chance to win a $300 NHL Shop Gift Card and the $3,000 Period Prize. NHL Hat Trick Challenge will also have a Playoffs period that includes round by round prizes and a grand prize of $10,000 to the winner. Consumers can download and play the challenge on Apple Store or Google Play to compete against NHL Network’s Kevin Weekes and NBC’s Kathryn Tappen.

TheGEICO Cup Crazy trivia platform is running on the NHL’s Twitter account. The trivia game allows fans the opportunity to compete by testing their knowledge of the NHL.

Jagermeister, the official shot of the NHL, is offering "The Shot of the Night," which opened the first day of the qualifiers. Five fans will have the chance to win prizes to enhance their at- home game watching experience by visiting JMhockeyreturns.com. The brand also is launching new hockey-themed creative to coincide with the Stanley Cup Playoffs.

Apple is bringing back its “Shot on iPhone” with a short film featuring Vegas Golden Knights’ Marc-Andre Fleury and Mark Stone. The teammates pulled stunts to demonstrate the camera capabilities.

In Canada, fans are encouraged to log into the Tim Hortons app every day during the Stanley Cup Playoffs to predict which three players they think will score a goal in that day’s games. Choosing correctly rewards users with Tim Hortons discounts and product prizes.

Pepsi and Lays are hosting an in-store POS campaign in Canada, including a contest overlay of Pepsi’s “Bring Hockey the Cup” along with a user-generated content call-to-action and an augmented reality experience allowing fans to virtually “hoist” the Cup.