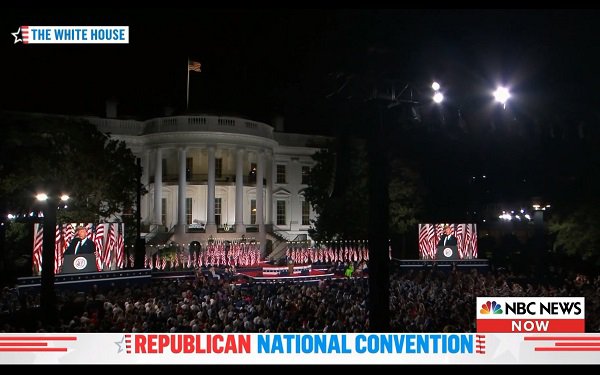 Just when you thought it could not get any more tasteless, fireworks suddenly spelled the words “TRUMP 2020” in the night sky over the Washington Monument.

It was at that moment that you had to wonder if, after two consecutive weeks of prime-time political conventioneering, the world had gone mad.

But no. That was just Donald Trump taking the final night of the GOP’s televised virtual convention to whole ’nother level.

Only Trump could conceive of -- and have the audacity to actually stage -- a fireworks show over the nation’s beloved National Mall to promote his reelection campaign.

The fireworks came after Trump gave a marathon speech delivered on the South Lawn of the White House that lasted well over an hour.

With the White House’s famous south portico lit up like a theatrical backdrop, Trump accepted the Republican nomination for a second term.

Two nights earlier, on Tuesday, the GOP and the Trump campaign were criticized for using the White House and its grounds as props and stage sets for segments seen on that evening’s episode of this week’s Republican Convention show.

Most notably, First Lady Melania Trump gave a speech from the White House Rose Garden that had just been renovated for that occasion -- under her supervision.

Not only was the use of the White House in this way deemed inappropriate by many, but it may have violated laws that govern and restrict the use of such publicly owned property for these kinds of political campaign purposes.

But all of that was nothing compared to the starring role the White House played in Thursday night’s GOP grand finale.

Questions of law and inappropriateness aside, the use of the White House as a reelection aid would appear to give an incumbent president an unfair visual advantage over an opponent who cannot obtain access to a backdrop of similar importance or significance.

At times, Trump’s message seemed to be: I’m already here. Why evict me? He actually said at one point, as he gestured at the building behind him and remarked on its beauty: “The fact is, we’re already here and they’re not.”

Whether or not the tastelessness, inappropriateness or unfairness of using the White House for campaign purposes will occur to the average voter who watched this spectacle on Thursday night, other aspects of the Trump acceptance speech segment of the evening were just as jarring.

It could not have been lost on anyone that the audience members seated in folding chairs on the South Lawn -- estimated at a thousand or more -- were not positioned six feet apart. In addition, the vast majority were not wearing face masks.

As a visual, this set-up represented a degree of poor judgement that was not much in evidence over the four nights of this virtual GOP convention, much of which was superbly produced right down to the smallest detail.

But here, a large group of entitled friends, associates, family members and honored guests of the president of the United States were not social distancing or wearing the face coverings that all of us regular people are being told to wear every time we set foot outside our homes.

We have all altered our lives -- wearing masks on the hottest of summer days, and trying our best to stand or sit six feet apart when interacting with others.

The fact that the president and his friends could not be bothered to do the same as a symbolic gesture on national television was unseemly.

As for Trump’s speech, it was much too long. It was repetitive and at times dull -- which is not an adjective I would generally use to describe a Trump speech.

After it was over, it was time for fireworks shot up into the night sky from what appeared to be public property.

Instead of watching this display with the customary oohing and aahing that fireworks usually elicit, viewers watching at home were more likely asking themselves: Who’s paying for this?