Everything But The Bike: RevZilla Accelerates Its Email Marketing 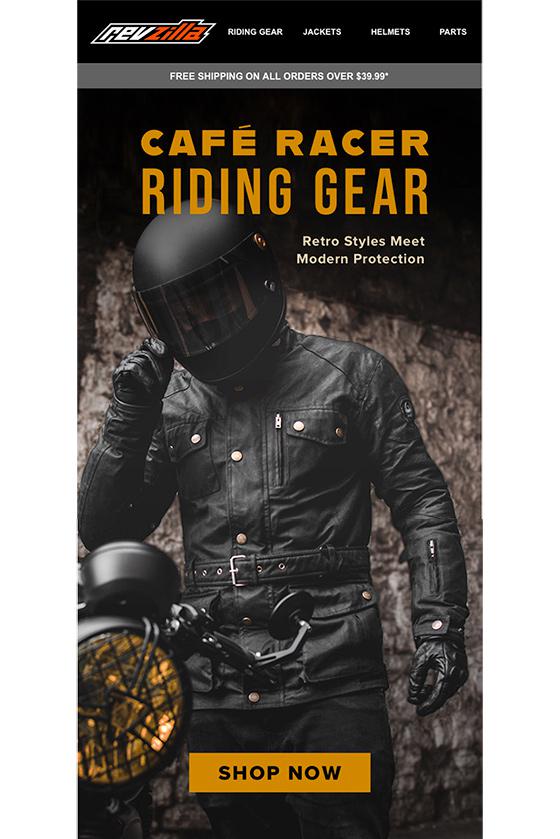 It was sending emails twice a week to its entire list. But it realized that it had to provide “a more tailored experience with automation,” says Andrew Lim, director of retention marketing at RevZilla.

RevZilla and its sister retailer Cycle Gear began working with Sailthru, a CM Group brand, to help them move from batch-and-blast emailing to automated trigger emails.

RevZilla is part of the Comoto family of brands. The portfolio, which also includes Cycle Gear and JP Cycles, has close to 3 million customers overall. RevZilla accounts for 1 million.

These brands offer helmets, gears and parts — “everything but the bike,” Lim says.

But motorcycle owners have as many personal preferences as other consumers. And RevZilla is now able to cater to these choices thanks to Sailthru’s Lifecycle Optimizer and its other personalization tools.

Sailthru now supports triggers for browse and cart abandonment and other behaviors, riding styles, manufacturer preferences and additional variables—maybe 180 triggers in all.

The transition was fairly smooth. RevZilla had been using another vendor, but “there was not a lot of data flowing between our systems and our ESP,” Lim says. “We were building from the ground up.”

Initially, RevZilla moved from two emails per week to five, but revenue is so strong that it is now slowly rolling back frequency with better targeting and is down to four emails per week.

As befits an action hobby like motorcycling, the emails are highly visual. One recent one, promoting Café Racer riding gear, features a compelling photo of a black-leather-clad rider, with a call-to-action, saying Shop Now.

The average RevZilla customer is around 35 to 40 years of age, and the customer base is largely male.

Of course, the brand also a social presence and a retail component.

First off, email now generates 10% to 14% of online revenue for RevZilla and Cycle Gear, up from 9% to 10% previously.

What’s more, the conversion rate is now twice that of the old batch-and-blast approach. In addition, triggered revenue is up 22% and site traffic 128% year over year. And those automated experiences now account for 40% of email revenue.

How has COVID-19 affected business?

There was a drop-off in March and April. But then it stabilized — and in fact grew — as people returned to their hobbies. Moreover, many people have been taking up motorcycles for the first time, Lim says.

ReVZilla hopes to improve its content creation as the three brands strive not only to become retailers of choice, but also to pursue information-based strategies.  “We created content in a vacuum,” Lim admits.

Could RevZilla have done anything better? “We probably should have experimented more,” Lim says. Testing, experimentation — we could have learned more up front.” Now it has a green light.