One Word Sums Up 'Raised By Wolves' On HBO Max: Wow! 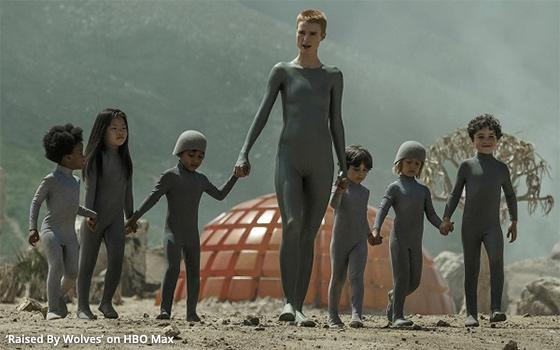 Reviewing a TV show with the three-letter word “Wow” is not the most literate or sophisticated way to go about writing a review, but there it is.

“Wow!” -- with an exclamation point -- was the first word that came to mind when the first episode of this new HBO Max sci-fi series came to an end.

This show -- titled “Raised By Wolves” and scheduled to start streaming on HBO Max this Thursday -- accomplishes a number of things that often prove tricky or elusive to so many other shows.

One was its ability to surprise a jaded viewer whose long experience in the “profession” of watching TV for a living has provided him with a talent for predicting what various characters will do or say, and what is likely to happen next in myriad plot lines.

This was not so in the premiere episode of “Raised By Wolves.” Instead, a surprise awaited at every turn. This show and its unfolding story were so unpredictable, and watching it was so much fun, that I dreaded the approach of the episode’s conclusion.

This characteristic of “Raised By Wolves” makes it tailor-made for streaming. Fortunately, thanks to streaming, neither I nor anybody else needs to wait a week to see more. This show is a 10-episode binge just waiting to happen.

The other thing “Raised By Wolves” does so well is its successful conjuring of a strange new world.

This is often a goal of science-fiction TV shows and movies. But in so many of them, the future (or past) worlds they are trying to create are almost never fully realized. As a result, you do not fully believe or accept them either.

This is not the case in “Raised By Wolves.” The show is about a post-apocalyptic universe in which the human survivors of a war that destroyed Earth are flying among the stars in great spaceship arks seeking planets hospitable enough to support resettlement.

But long before we learn this, we are introduced to a small family of six human children and two android parents who are living alone on just the sort of planet the interstellar ark travelers are seeking.

In addition, the androids are raising their children to be atheists, which puts them in conflict with the space-traveling humans who all practice a religion that is a futuristic hybrid of monotheistic belief systems.

The preceding paragraphs of description might make the show seem leaden and complicated, but please do not let the description fool you.

This show was a pleasure to watch. The world that this production team has dreamed up is weird and wonderful and endlessly panoramic and fascinating.

The marquee name on this show in the publicity materials provided by HBO Max is Ridley Scott, the 82-year-old director of a long list of blockbuster films ranging from “Thelma and Louise” to “Gladiator.”

“Raised By Wolves” is from his production company, and he directed the first two episodes. Therein lies a lesson: If you want something done right, hire someone who really knows how to do it.

digital, streaming, television
1 comment about "One Word Sums Up 'Raised By Wolves' On HBO Max: Wow!".
Check to receive email when comments are posted.
Next story loading