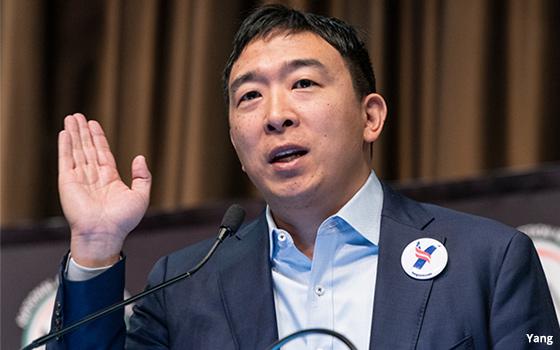 “Our data should be ours no matter what platforms and apps we use,” the entrepreneur with ties to Silicon Valley stated Monday.

Yang will serve as chair of the advisory board of Californians for Consumer Privacy -- which is behind the push for new privacy measures.

California's current Consumer Privacy Act, which took effect this year, gives consumers the right to learn what personal information about them is held by businesses, request deletion of that information, and opt out of its sale.

The 52-page Proposition 24, which will be on the California ballot in November, would broaden that law in several ways. Among others, the new measure would make it harder for companies to use data about race, ethnicity, health, or finances for advertising.

Advocates have had a mixed response to the proposal. Consumer Watchdog, Common Sense Media and the California NAACP support the measure, but other organizations -- including the ACLU of California and Consumer Federation of California -- oppose it.

The Electronic Frontier Foundation declined to either endorse or oppose the proposal, calling it “a mixed bag of partial steps backwards and forwards."

“Businesses should only collect data on users that 'opt-in' by affirmatively granting permission,” the paper said in a recent editorial.

“Prop. 24 would allow companies to charge higher prices to consumers who choose to protect their privacy,” the paper continued. “That’s just wrong on principle. It also places a higher burden on lower-income consumers who do not have the means to pay a premium for a superior product.”