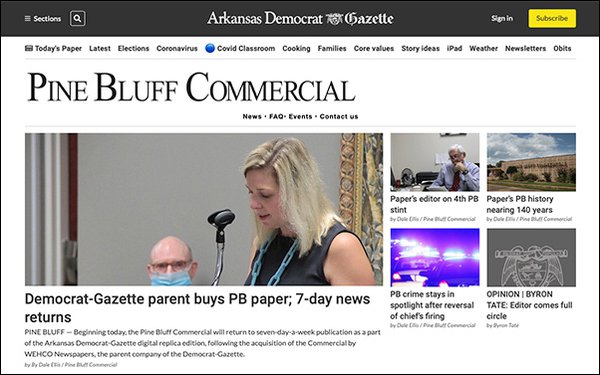 Gannett is selling the Pine Bluff Commercial to WEHCO Newspapers Inc., parent company of the Chattanooga Times Free Press and the Arkansas Democrat-Gazette.

Walter Hussman Jr., publisher of the Democrat-Gazette, told the Chattanooga Times Free Presshe has hit on a model that is viable for local publishers.

The Pine Bluff Commercial will continue daily publication with a twist: It will have four pages that cover news, daily records, obits, an opinion page and sports. Those pages will be added to the Arkansas Democrat-Gazette's digital replica format seven days a week. The Democrat-Gazette, as well as other WEHCO newspapers have gone digital-only, save for a Sunday print newspaper.

The digital replica mimics the print edition, but delivered to an iPad or other computer device. The feature sustains continuity for readers. And it gives the added bonus of being able to enlarge type.

Hussman is cross-pollinating publications: He will also provide Commercial readers with the full Democrat-Gazette.

"If this works in Pine Bluff, this is going to be great for community journalism in America because it's going to show a model and a path forward for other newspapers to be sustainable and survivable," Hussman said.

New Media recently acquired Gannett, the largest newspaper publisher in the U.S. Gannett owns nine newspapers in Tennessee, including the Tennessean in Nashville, the Knoxville News-Sentinel and the Commercial Appeal in Memphis.

WEHCO Newspapers, Inc. is one of a handful of newspapers that has remained under family control for more than a century.