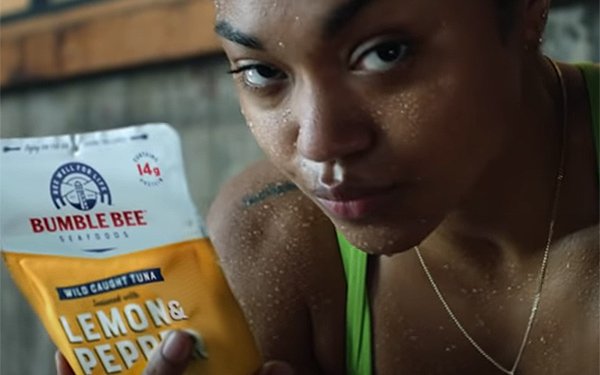 A new campaign leverages “unexpected creative that shows tuna in a unique light that hasn’t been done in the past within this category,” according to Dan Hofmeister, senior vice president of brand marketing for Bumble Bee.

The unexpected is on full display in a 30-second spot titled “What Fuels You?”

It opens with a sweaty young woman in gym garb performing a variety of strenuous workouts. “When you have nothing left, what fuels you?” the voiceover asks. “Your pride? Your pain?”

At the point in the commercial, where viewers might expect to see an energy drink appear, the woman gazes at a pouch of Bumble Bee lemon- and pepper-flavored tuna.

“Or is it Bumble Bee tuna?” says the voiceover. The spot concludes by describing Bumble Bee as “lean protein-fueled energy.”

The campaign comes a few months after Bumble Bee Foods redesigned its packaging — eliminating the 120-year-old Horatio the bee mascot — in the process of pursuing a wellness positioning.

“This is the largest investment we’ve made in brand marketing in a long time,” Hofmeister tells Marketing Daily.

The campaign has its roots in research showing why some people purchase shelf-stable tuna and others do not.

“What we found in our research is there are lot of consumers who may have grown up eating tuna, but have simply fallen out of the habit…of including it in their regular routine.”

Those findings dovetailed with the onset of COVID-19 and its impact on eating habits.

“What we found is that consumers are looking for accessible, affordable, nutritious and delicious food that fits their lifestyle,” Hofmeister adds. “And they’re looking for that now more than ever, given the unique situation we’re all living through.”

The second of two campaign spots, to be followed by two more in the coming weeks, is dubbed “Get Your Melt On.” It shows jalapenos, chives, cheddar cheese and roasted onions being assembled into a heated sandwich — along with Bumble Bee tuna.

On YouTube, for example, “someone searching for fitness equipment or exercise routines” might encounter the “What Fuels You?” video, according to Hofmeister.