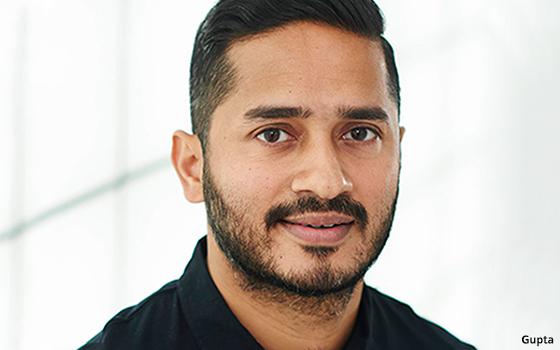 In the newly created role, Gupta will be responsible for driving strategy as the company transforms to a subscription-led content business.

Last month, Gannett announced in its second-quarter earnings report that its paid digital subscriptions had increased 31% year-over-year to 927,000.

Gupta will also lead the marketing and growth functions at the company, connecting data, technology and storytelling to deliver original content through apps, audio, video, live events and emerging technologies, such as artificial and virtual reality.

The role is new because it combines marketing and strategy under one position. (Andy Yost, the previous CMO, left the company at the end of 2019.)

The role “helps us connect all the dots within the Gannett ecosystem. The value of the whole at Gannett is far superior to the sum of our individual parts,” Gupta told Publishers Daily.

Gannett’s portfolio includes USA Today, local media organizations in 46 states in the U.S. and Guam, as well as Newsquest, a subsidiary with over 140 local media brands in the U.K.

Gupta stressed the importance of acquiring new subscribers, as well as retaining them, by continuing to add “incremental value to the user.” He has served as a member of the Gannett Board of Directors for just under a year, but will step down from that position.

“We are very excited to have Mayur transition from his role as a board member to join our leadership team,” stated Michael Reed, chairman and CEO of Gannett. “Mayur has a strong track record as a growth and content marketer at big CPGs like Kimberly Clark as well as disruptive start-ups like Spotify and Freshly that have re-shaped their categories.”

He added that Gupta’s experience “building content driven subscription models and his ability to execute on a vision and strategy with speed and agility align well with our goals for this role.”

Gupta most recently served as the Chief Marketing Officer at Freshly. Prior to Freshly, he was the global vice president for growth and marketing at Spotify.

The company's board of directors has begun a search process for replacing Gupta’s seat.