Nissan, Hyundai Return To Football, Whatever The Season Might Bring 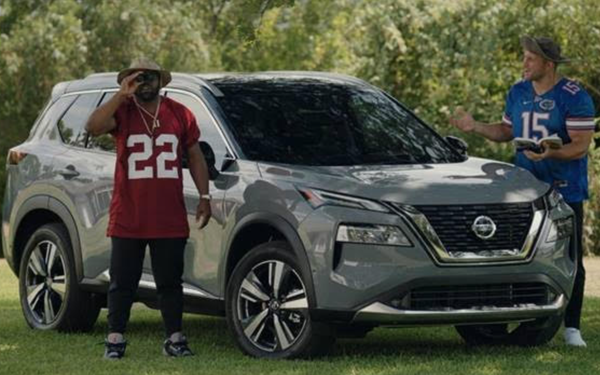 For the first time, Nissan North America is bringing its star-studded “Heisman House” to both college and professional football, one of several new twists as the campaign returns for its tenth season.

Vehicles highlighted in the spots are the all-new 2021 Rogue alongside the Nissan Sentra, refreshed Titan pickup and Kicks subcompact SUV. The effort from TBWA\Chiat\Day New York is themed “It’s a Heisman Thing.”

“While there’s no doubt that the 2020 college football season will look different, the humor, camaraderie and excitement of the Nissan Heisman House remain relevant, perhaps even more so during this time when audiences are craving some semblance of normalcy,” says Allyson Witherspoon, vice president, marketing communications and media, Nissan North America, in a release.

Social distancing was strictly enforced during the shoot. In the spot titled “Anticipation,” Tebow is driving the Rogue with Murray riding shotgun. The two filmed their portions of the spot separately, each addressing their lines to a tennis ball.

The spots will run on TV across ESPN, ABC, FOX and CBS. More content will be available on Nissan’s and ESPN’s digital channels including a 3D experience at TheHeismanHouse.com as well as behind-the-scenes footage and bloopers from the shoot at “Heismans Find a Way.”

“College sports is the largest area of Nissan’s annual media spend, and we’re committed to sharing in the excitement with customers through content they love to watch,” Witherspoon says. “Come what may, we’ll adjust and innovate as we always do.”

At Hyundai, the automaker is focusing this year on its flagship SUV Palisade and showcasing its capabilities as the ideal tailgate vehicle, says Angela Zepeda, CMO, Hyundai Motor America.

“Sunday Night Football is one of our signature sponsorships in generating brand awareness among the 20 million viewers each week,” Zepeda says in a release.

Evolved from “Cover 2” and “Game Winning Drive” content campaigns from seasons past, “Tailback Tailgate” is a three-part content series that will bring two former running back greats together in a conversation around the game.

The currently unspecified (contracts have not been signed) former pro running backs will tailgate out of the back of a Hyundai Palisade Calligraphy Edition where they will discuss that week’s game over iconic cuisine from the home city that week. “Tailback Tailgate” will air during "Football Night in America" leading into three "Sunday Night Football" games.