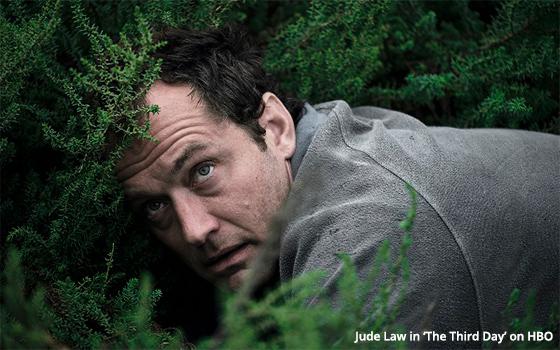 Creepy things are happening just beneath the surface (and sometimes above the surface too) on an isolated, sparsely populated British isle.

Into this unsettling terrain steps a man who has no idea what he is getting into. In a nutshell, this is the broad outline of “The Third Day,” a six-part, limited drama series starting on HBO on Monday night.

The meaning of the show’s title was not evident in the premiere episode that the TV Blog previewed. It may have to do with this man’s third day on this island, or it could be that the show itself is starting three days after some other incident we will learn about later.

In Episode 1, we are clearly in this man’s first day on this island, which is reachable only via a gravel causeway that is navigable only at low tide. At all other times, the causeway is submerged.

The low-tide windows are apparently narrow, because missing one of them strands this man among this island’s residents whose insulation from the outside world makes them wary of outside visitors.

The man is played by Jude Law, pictured above. He is the kind of character who is common to movies and TV shows of this type -- the man, woman or teen who simply cannot resist mindlessly venturing into places where we viewers can already sense that he or she does not belong.

At various points in Episode 1, you want to scream at this man, but obviously he cannot hear you.

The urge to tell a character on a TV show to stay away from that room or locked door is usually a good sign of the effectiveness of a terror tale like this one.

“The Third Day” is a high-quality show -- suspenseful, mysterious and beautifully shot and directed.

We learn quite a lot about this island and its inhabitants in Episode 1, but at the same time, we also come to understand that what we now know is just the tip of the iceberg.

There is much more to find out about them, and what awaits this man whose presence on their island seems to have occurred purely by happenstance. Or has it?