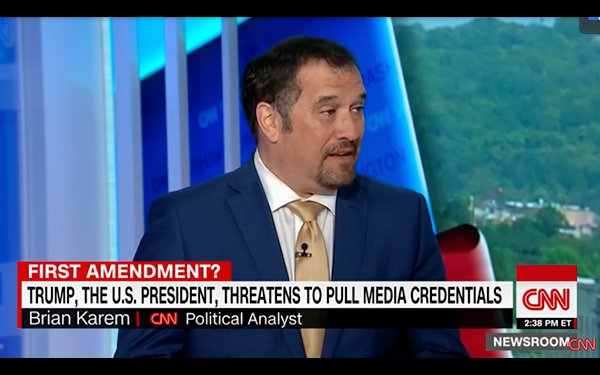 Opposing a request by the Trump administration, attorneys for journalist Brian Karem are asking a federal appellate court to leave in place an earlier decision requiring the White House press secretary to restore the reporter's press credentials.

In papers filed Wednesday, Karem's lawyers argue that the government “offers no persuasive reason” for a new hearing in the matter.

Toward the end of the event, Trump gave a prepared speech at the Rose Garden. Karem, a correspondent for Playboy and analyst on CNN, was among the journalists present in a cordoned press area for that speech. Afterwards, he and former Trump advisor Sebastian Gorka publicly argued.

Karem then sought a court order restoring his credentials, arguing that the revocation violated his right to due process of law. Specifically, his lawyers argued Karem didn't have fair notice that his press pass could be revoked for one month due to allegedly unprofessional conduct.

A trial judge agreed with Karem and issued an injunction requiring the restoration of his credentials.

Last month, the Justice Department asked the entire D.C. Circuit to reconsider the case and reverse that 43-year-old ruling.

The government's lawyers argued that the 1977 decision “intrudes substantially on the core White House prerogative of controlling access to the workplace of the President.”

The government alternatively argued the decision to suspend Karem's press credentials didn't deprive him of due process.

Karem's lawyers are now asking the D.C. Circuit to reject the government's arguments and decline to rehear the case.

“There is no reason to overrule a well-settled 43-year-old precedent,” his attorneys write, adding that the decision has “governed the White House’s relationship with the press corps for 43 years without incident and without hindering the White House’s ability to maintain order.”

The attorneys add: “The government’s real purpose in urging this Court to overrule Sherrill is to empower the White House to control the press by punishing and denying access to reporters whose coverage the President dislikes.”