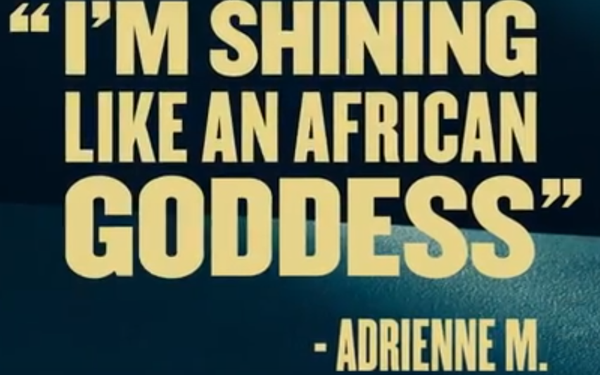 “Champion Your Skin” is the theme of a new campaign that represents a “master brand reintroduction” of Gold Bond hand and body lotions.

It positions the 112-year-old Gold Bond—widely known for its male-skewing, medicated powders—as a high-performance skincare brand.

A 30-second commercial from the Terri & Sandy agency shows men and women in a variety of strenuous work and leisure activities, with the words “moisturizers,” “vitamins” and “hydration” superimposed on the screen.

“For skin as alive as you are, don’t settle for silver,” says a voiceover (presumably referencing gold’s superiority) that accompanies the song “Don’t Blink” by singer-songwriter Fiona Bevan.

“We are launching not just a new campaign but an entirely new brand attitude to break from a stagnant category,” Terri & Sandy creative director Todd Condie tells Marketing Daily.

What unites the people in the spot is their approach to life. “These are people who don’t have hours to spend in their bathroom gently caressing lotion into their skin, which is what the category typically shows. These are people with places to go, things to do,” says Condie. “It’s all about skin in motion, skin in action, skin ready to live.”

A 6-second spot for Gold Bond Radiance Renewal hydrating lotion spotlights a quote that says “I’m shining like an African goddess,” attributed to Adrienne M.—who isn’t a celebrity or paid endorser, according to Condie.

“As we were doing our research, we came across these quotes and reviews from average consumers who were shouting about Gold Bond from the rooftops. We saw that and said, ‘That’s an ad. Why would we say anything different?’

“So we just reached out and asked for permission to use their quotes.”

The agency used Duotone Audio Group to “scour the world for a track we thought would match Gold Bond’s optimism and vivaciousness” and landed Bevan—who co-wrote the hit song “Little Things” with musician Ed Sheeran.

“We felt honored that not only did we get an incredible anthem in ‘Don’t Blink,’ but we got to be the ones who introduced it to the world,” says Condie.