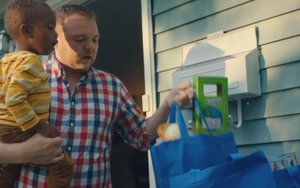 Walmart is introducing the ad campaign for its brand-new Walmart+ membership program, and anyone expecting it to focus on digital wizardry or fast delivery is going to be disappointed. Instead, the ads feature a highly diverse cast of real families doing the things they love to do -- and none of it involves shopping.

Created by Deutsch LA and directed by husband-and-wife filmmaking duo Daniel and Katina Mercadante, the ads follow 22 families. From more than 100 hours of unscripted footage and 30 hours of audio interviews, the documentary-style effort is a first for the Bentonville, Arkansas-based retailer.

It “captures a snapshot into their authentic, chaotic and beautiful lives,” writes William White, chief marketing officer, in a blog explaining the new effort.

Based on the insight that the average family spends 2.5 hours a week shopping, it focuses on what they’d prefer to be doing instead: Spending time with each other.

Walmart says the “Different Kind of Membership” campaign is its biggest of the year, starting with a 60-second spot during the football season opener. Besides broadcast, it also includes digital, social, radio and experiential elements.

Activations include “plus up” events, focusing on customers’ most-missed moments due to COVID-19. It says the first “Plus Me Up” experience, scheduled to be showcased on NBC Sports’ “Sunday Night Football,” includes surprising a health care worker and his/her family with the opportunity to be the only fans in the stadium during a select game this season.

Keying in on convenience and time-saving benefits may help set Walmart+ apart from Amazon Prime, already a regular part of 112 million people’s lives in the U.S.

The Walmart+ launch comes at a time when Americans are continually re-evaluating the ways they shop, particularly for groceries.

Brick Meets Click, a consulting firm in Barrington, Illinois, just released its latest analysis. It finds that while online grocery shopping has declined a bit in the last month, there are strong indications that consumers are relying on it more than ever. Americans spent $5.7 billion on grocery delivery and pickup sales in August, down 20% from the peak in June.

But average order size increased to $95, a record high. And 75% of those in the survey, based on some 1,800 respondents, say they intend to make repeat purchases in the month ahead.

Overall, the market is five times larger than it was a year ago.

“There is a common belief that the rapid and dramatic surge in sales caused by COVID-19, starting in mid-March, would recede at some point,” says David Bishop, partner, Brick Meets Click, in the report.

Instead, “the market appears positioned to begin a new growth cycle with a large base of committed shoppers.”

Its research, in partnership with Mercatus, finds that 37.5 million, or 29% of U.S. households, used online grocery services in August, compared to 16.1 million one year ago.