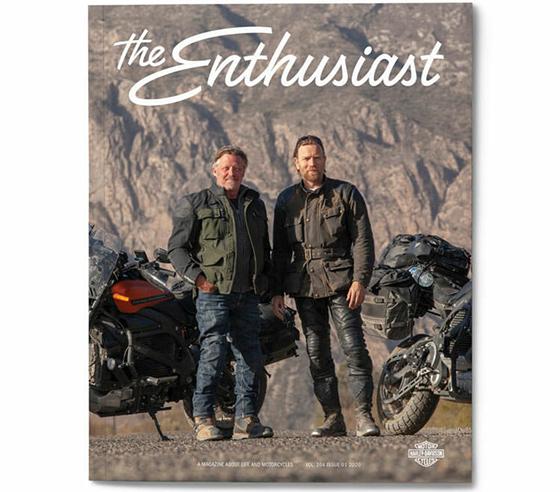 Fat Boy fans have cause to celebrate.

The new quarterly will replace “HOG Magazine” and enjoy a wider distribution as the official publication of the company. The first issue features actor Ewan McGregor (“Star Wars”) and Charley Boorman, stars of the new Apple TV+ series “Long Way Up,”  premiering Sept.18. Issues will include stories from the road, rider profiles and product reviews.

All Harley Owner Group members will receive a complimentary subscription to “The Enthusiast.” Free app versions can be downloaded via iOS and Android devices. In addition, Harley-Davidson is exploring selling single issues on its site.

Also in 2020, the Fat Boy celebrates its 30th anniversary with a limited-edition cruiser; there are just 2,500 in the world.

“In a year when so many people have been stuck inside, we passionately believe in inspiring riders and aspiring riders to get out in the world to rediscover adventure through socially-distanced riding,”said Jochen Zeitz, Harley-Davidson President-CEO.

Separately, the 35-year-old “Windy City Times” has pulled the plug on its print edition and will go digital-only in October. “We know many people prefer the print model, but the economics are just not sustainable,” said co-founder-majority owner Tracy Baim, who became publisher of the “Chicago Reader” in 2018.

Three of the paper’s five employees will be furloughed as the company solicits additional funding.

The special collector’s edition on Sept. 30 will include a retrospective of the three-plus decades. The “WCT” is the last LGBTQ newspaper in Chicago. The website will preserve its archives.