Vote From Home 2020's 'Suppress This' Get Out The Vote Campaign 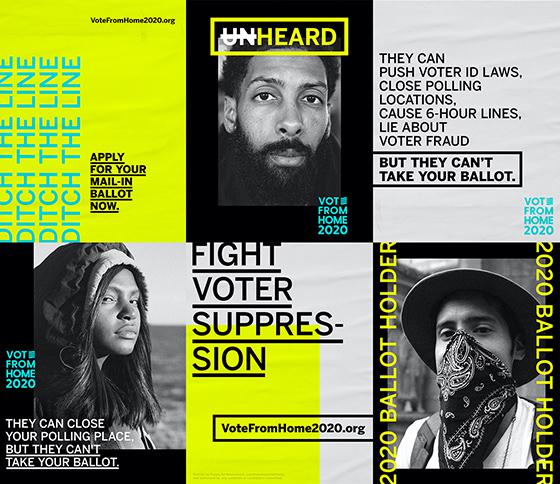 Grass roots group Vote From Home 2020 is out with new ad campaign ‘Suppress This’ that positions mail-in voting as the solution for voting challenges from both attempted systematic suppression of voting rights by Trump and his supporters and COVID-19.

The effort, created pro bono by Duncan Channon, comes amid worries that Trump will do everything in his power (legal or otherwise) to suppress the turnout for the 2020 presidential election. But it also comes amid suggestions that the U.S. Postal Service isn’t up to the task of properly processing all the expected mail-in votes expected this year, despite assurances by postal officials that it is.

For voters of color who disproportionately face suppression tactics such as biased voter-ID legislation and limited polling sites in their own communities, the pandemic adds a new obstacle this November. With Black and Brown Americans three times more likely to get coronavirus and two times more likely to die from it, the campaign punctuates the fact that that no one should have to risk their life to cast their ballot.

To further support the mission of empowering voters and mitigating the effects of suppression and COVID-19 on turnout, the new campaign calls on citizens to help fight voter suppression by donating to get absentee ballot applications in the hands of at-risk voters. A $25 donation to Vote From Home 2020 equals 20 absentee ballots application packages mailed, according to the group.

Duncan Channon worked with One Union, who also donated their time pro bono, to produce the radio and TV spots. The messaging includes lines like ‘They can push voter ID laws, shut down the polling place in your neighborhood, make you wait hours in line…but they can’t take your ballot.”

DC secured the media for the campaign, all of which is being donated by media properties including Roku, Buzzfeed, Pandora, Vevo, among others. Meredith Corporation is donating print ad space in select publications such as People, Real Simple, Better Homes and Gardens, Food and Wine and Entertainment Weekly. Digital creative will also be targeted to reach at-risk voters via social media in key swing states Pennsylvania, North Carolina and Michigan.