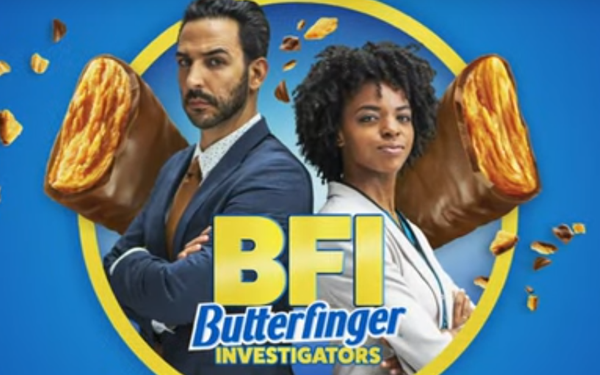 Having revamped Butterfinger’s ingredients and packaging, Ferrero wants to “compete in popular culture” with a pre-Halloween campaign that takes a hilariously dramatic look at candy swiping.

Breaking today, the Butterfinger Investigators campaign features Amir Arison—who plays an FBI agent in the NBC series “The Blacklist”—and Alexandria Benford, who starred in the movie “Valley Of Ditches,” in the roles of Hugh Dunnit and Ali Byes.

The duo team up to enforce the brand’s “no one lays a finger on your Butterfinger” theme in commercials running on TV networks, digital and social channels.

In a 30-second spot by the creative agency/production company Piro, Dunnit and Byes help a woman figure out who is stealing Butterfingers from her home, which they monitor remotely as she sets her handbag on a dining room table.

As they watch, the woman’s boyfriend appears from hiding and snatches a Butterfinger from the bag—only to be doused with a blue liquid. Dunnit and Byes confront him as the woman munches on her candy.

A nearly five-minute video on the Butterfinger YouTube channel provides extra twists and turns with prime-time production values—including a convoluted take on the dining room scene in which the boyfriend’s grandmother disguises herself as her grandson.

“We loved it when the team came up with that story, because it adds some curve balls to the approach of traditional advertising. We’re trying to entertain, give people some joy and delight and compete in popular culture.”

The campaign is accompanied by a contest titled "Turn Yourself In," in which adults 18+ can sign an online “digital confession” attesting to have pilfered a Butterfinger for the chance to win $25,000.

“We know that during Halloween, one of the things that happens is parents like to sneak a few treats out of their kids’ baskets,” Wakefield says of the contest concept.

Ferrero acquired Butterfinger along with other confectionary brands from Nestle in 2018.

Since then, “We enhanced the ingredients, we removed artificial preservatives and colors and went to a cleaner label.”