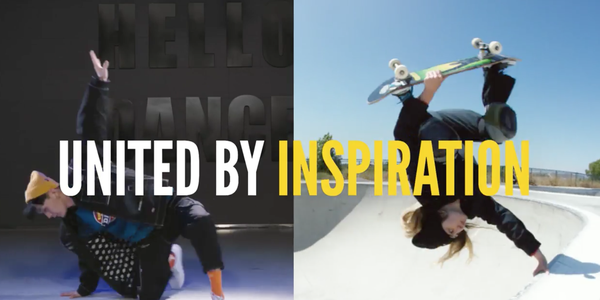 The brand’s first-ever global multimedia ad/marketing campaign is themed “United by Inspiration, United by Dickies” and is digital-first. Agency Sid Lee curated 100 hundreds of hours of video shot by makers themselves to create the ads, says Kathy Hines, vice president of global marketing and licensing for Dickies.

“They took that and put that beautiful creative lens over it so that we could tell that story in a cohesive way,” Hines says.

Showing the makers united across cultures is the backbone of the campaign.

“That’s a really beautiful story to tell, especially in this time of extreme division," Hines tells Marketing Daily. "We thought, ‘What if we can model the power and the impact of being inspired by others?’ So that was the premise for the campaign.”

The shoot was originally scheduled for May and the brand decided to stick with the campaign’s theme despite the pandemic.

“A message about inspiration and unification is something that transcends this moment of COVID and probably is even more powerful than ever,” Hines says.

The campaign launches today and includes global digital, social, connected TV and custom content that personifies the makers via stills, 6- and 15-second films

Featured makers include American urban and rural farmers, a British barber, a German builder, a Canadian furniture maker, a Mexican metal sculptor, a Chinese dancer and an American skateboarder.

“We intentionally chose a group was reflective of all of the regions that we served, as well as all of the different trades and crafts from the traditional artisan and blue-collar worker, all the way to the more creative artisans,” Hines says. “Something that’s really important for us as a brand is to hold a mirror to society, and the people that we work with have to really be a reflection of the communities that we serve.”

Each 15-second spot showcases two makers side by side in a split screen from their side of the world. Despite the geographic distance, they are united globally through inspiration.

One of Dickies’ most recognized products since the 1940s, the Eisenhower jacket, is worn by each maker throughout the creative to further unite and bring their worlds together.

The target audience for the campaign is based on passion points, not age or other demographic information, Hines says.

Dickies has fared well during the pandemic, with comfortable and casual clothing becoming staples for office workers who are now working at home. Hines calls the brand “democratic,” which means it’s attractive to a wide spectrum of consumers.

“I don't mean from the political perspective, it's for everyone who has an appreciation for making and creating,” she says. “It doesn't discriminate because it's at a price point that's actually very accessible. So the brand has continued to perform, despite this difficult time that we're living in.”