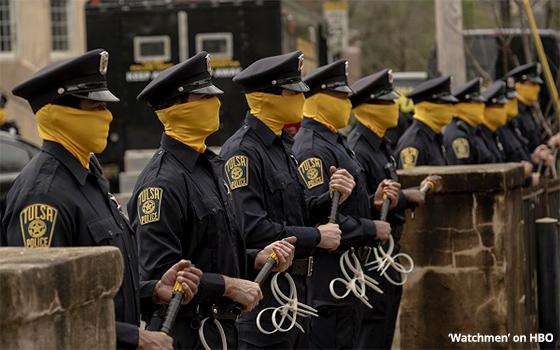 Like everything else in our national life that once generated excitement from the presence of crowds socially commingling, this year’s Emmy Awards on Sunday night will be similarly diminished.

It is one of the central features of the COVID-19 era: Celebrations and big events all undertaken with masks and social distancing or, more frequently, not undertaken in person at all but connected remotely via Zoom or Microsoft Teams.

From canceled weddings to major sports events played with cardboard cutouts sitting in for live spectators, everything that used to be noisy, exuberant and exciting is now quiet and subdued.

If memory serves, there have been no big show business awards shows at all, either virtual or otherwise, since the pandemic lockdowns took effect in mid-March.

In June, the Tonys were postponed indefinitely. They were the only major entertainment awards scheduled in the first months of the pandemic.

For the record, ESPN went ahead with its annual Espy Awards -- more of a sports awards show than an entertainment awards show -- in July. But that was all done remotely.

Perhaps the ESPYs will serve as a template for what the Emmy Awards will look like on ABC this weekend, hosted remotely by Jimmy Kimmel.

As with most such gatherings, there will be no theater filled with stars clad in designer gowns and tuxedos. Instead, expect to see a gaggle of TV stars participating from their homes in various states of casual dress.

From the mask-wearing to the anti-police rioting (both represented in the prescient photo above from the show nominated for the most Emmys this year with 26 -- HBO's “Watchmen”), our world has changed in ways most of us are struggling to understand.

In this context, it is reasonable to ask this simple question about the Emmys: Who cares?

It is true that a snarky TV columnist could ask this same question in any given year. But this year, this two-word query is not necessarily offered with sarcasm.

This is no ordinary time. With so many concerns taking up our attention close to home, family and our immediate neighborhoods, it is difficult to imagine very many people caring one way or another if “Watchmen” ekes out a Best Drama win over “Ozark” or HBO comes away with more Emmy statuettes than Netflix.

This year as in any other year, an Emmy Award is a great thing to win if your career happens to be in the creation and production of TV shows. Hats off to the winners. May your careers advance and prosper.

But this year more than ever, the average person -- aka, TV viewer -- has no stake in these awards whatsoever. Gone are the days when watching a handful of specific TV shows was an experience shared by mass audiences of tens of millions.

Are there people out there actually rooting for “Watchmen” in the same way Emmy audiences once did for dramas such as “The West Wing” or “The Sopranos”?

The answer: There might be some such people, but not enough to create a discernible groundswell of dismay or protest if “Watchmen” falls short on Sunday.

Television today provides an unprecedented plethora of choices -- a vast variety that many of us praise and appreciate, and rightly so.

But there is so much to choose from that mass audiences for any of TV's acclaimed series are nonexistent -- at least in the way that the phrase “mass audiences” was once defined (and assumed).

As a result, whether one show wins an Emmy or two over any other one this weekend will be largely meaningless to just about everyone except those who win the Emmys.

Moreover, an awards telecast that will lack most (if not all) of the show business trappings that viewing audiences expect from their televised awards shows will likely pay the price in low ratings.

Incredibly, last year's Emmy Awards drew an audience of just 6.9 million -- and that was at a time when there were none of today's anxiety-making distractions in the air.

The bottom line seems to be: Audiences no longer care about the Emmy Awards at the best of times. Expect them to care even less this weekend.