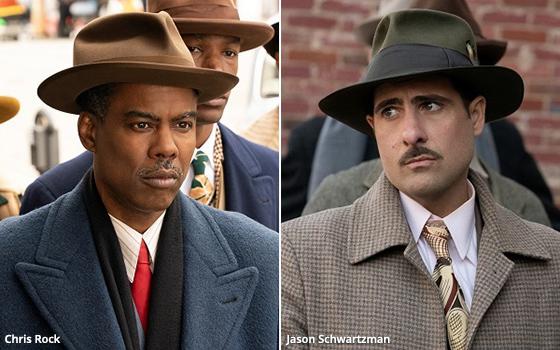 “Fargo” is not a place, but a state of mind.

This is the thought to keep in mind when considering both the original 1996 movie “Fargo” and the subsequent TV show, which first turned up in 2014.

The movie “Fargo” was never actually in Fargo, North Dakota. Instead, its story of a kidnaping gone awry took place east of North Dakota, roughly in the territory bookended by Brainerd, Minnesota to the north and Minneapolis, about 125 miles to the south.

Thus, a TV show named “Fargo” need not take place in Fargo either. This is the “Fargo” brand -- giving us a TV show whose many aspects defy expectations.

Thus, we get surprise casting decisions, for example, and storylines that have nothing to do with a city in North Dakota.

The new, fourth season of “Fargo” that starts Sunday on FX gives us all of these things, but possibly goes too far.

The new “Fargo” takes place in 1950 in Kansas City, Missouri. It tells the story of the conflict between a criminal organization run by second-generation Italian-Americans and a rival African-American gang with ambitions of first sharing various territories and business interests with the Italians, and then pushing them out.

Thus, this new “Fargo” is not only a crime story, but a race story as well. We even see the African-American mobsters getting rebuffed when they seek to do business with a prominent Kansas City bank run by a white man.

At the same time, we see the Italian mobsters being denied entry to a private hospital even as their boss appears to be bleeding to death. They are forced to try the Catholic hospital some distance away.

These stories of discrimination are designed to illustrate that these two groups are not really as different from each other as they perceive themselves to be.

How this knowledge can benefit anyone who chooses to watch this show is anybody’s guess, since it is difficult to care one way or the other about the challenges faced by these violent criminals.

As a result, the fictional gangsters throw around words such as “territory” and “business” in ways that are so unspecific that we really have no idea what their businesses even entail.

At one point in Episode Two, for example, the African-American gang stages an armed invasion of a meat-packing facility in a bid to take it over from the Italians.

A viewer is then left to wonder: What does this African-American gang want with this slaughterhouse? How does taking it over benefit them or otherwise enhance their crime business?

This question remains unanswered, although one answer might be: The people who made this show have no idea what organized crime does, or how it makes its money.

Most jarring of all about the new “Fargo” is the casting of the two lead roles. The one that is getting the lion’s share of attention in advance of the show’s premiere is the casting of comedian Chris Rock in the dramatic lead role of Loy Cannon, leader of the African-American crime group.

The other is Jason Schwartzman as the leader of the Italian-American crime family. Unfortunately, neither of them manages to bring their gangster-kingpin characters to life.

In the end, the best things about the new “Fargo” are its 1950s settings and props such as its cars and costumes, and its painterly cinematography.

The fourth season of “Fargo” starts Sunday night at 9 Eastern on FX.