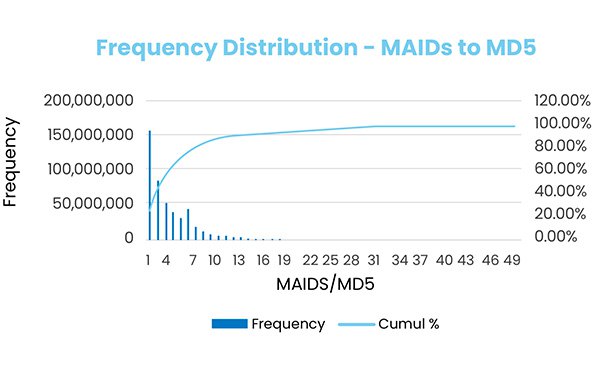 A full 25% of device identifiers guaranteeing specific consumer data sets are invalid, according to research by data exchange platform BDEX. Much of this bad data stems from ad fraud activities, such as spoofing, bots and click farms, but also human error, with one of the leading email offenders BDEX found being example@example.com.

BDEX analysts used data from more than 100 different suppliers to cross-reference mobile advertising IDs (MAID), hashed email (MD5), and IP addresses and compared these data points with other identifiers and location information in order to evaluate the validity and quality of the data.

Fraud is prevalent across all forms of so-called personalized identifiers. A full 20% of MAIDs sold in the U.S. data market are invalid and 21% of email MD5s are linked to more than 10 MAIDs, a sign of fraudulent information.

Also while not a direct indicator of fraud, the use of proxy servers can be a red flag for fraudulent activity, and companies should consider this factor when evaluating the validity of an identifier.

And  fraudulent identifiers may have obvious tells, such as accounts linking thousands of pages, unnaturally quick traffic on web pages or excessive traffic for extended periods of time.