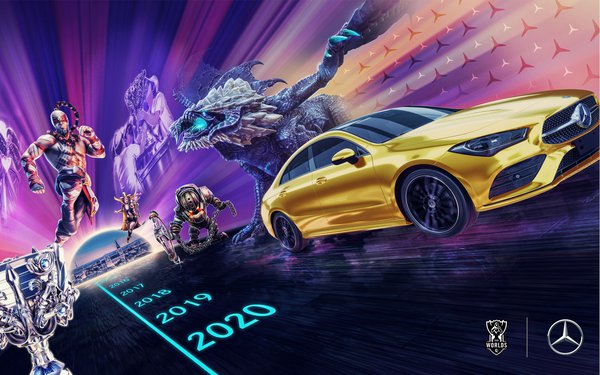 Mercedes-Benz AG has signed a multiyear agreement to become the exclusive automotive partner of Riot Games’ League of Legends Esports and its global events.

The new agreement names Mercedes-Benz the official automotive partner for the annual World Championship, Mid-Season Invitational and All-Star Events. The brand has been an existing partner of the League of Legends Pro League in China since 2018.

Although it might seem like an unusual sponsorship for a luxury brand, Mercedes-Benz is a “strong believer” in esports, says Bettina Fetzer, vice president marketing, Mercedes-Benz AG.

“By collaborating with Riot Games on a global level, we want to play an even more active role than before in shaping the future of esports. We also want to inspire fans with enthusiasm for our brand in a playful dialogue,” Fetzer says in a release.

Mercedes-Benz will be the first-ever presenting partner of the Trophy Ceremony at each of the three global events, with over 120 teams around the globe competing year-round for the chance to hoist the illustrious Summoner’s Cup at Worlds.

Throughout the course of the partnership, the luxury automotive brand will also create branded content, provide transportation to pro teams at major events, and engage in a broad variety of global activities.

“As the first luxury automotive brand to embrace esports at a global scale, Mercedes-Benz has developed a deep understanding of the unrelenting passion fueling the game and the League of Legends esports community,” said Naz Aletaha, head of global esports partnerships, Riot Games, in a release.

The partnership between Mercedes-Benz and Riot Games is the latest  step taken by the German car manufacturer to attract young and connected audiences within the fields of sports and entertainment.