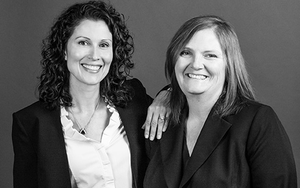 In 2016, friends Kristy Snyder and Kim Lawton founded Enthuse Marketing Group in Connecticut as a B2B event-marketing agency. For Snyder, it marked an exit from some two decades of teaching; for Lawton, it was the second marketing agency she helped establish.

But they weren’t content to just launch the women-led Enthuse, whose clients include spirits marketer Diageo and financial services provider UBS. Knowing the challenges that female-led startups face, they decided to help other women in the beverage, food and CPG space by starting the Enthuse Foundation.

In this interview, Snyder talks about the genesis of Enthuse Foundation and the upcoming, second annual pitch competition—which will be a virtual event, given the ongoing pandemic, for companies that are at least 51% women-owned.

CPG FYI: What was the motivation for starting a nonprofit foundation?

Kristy Snyder: We knew in founding Enthuse Marketing Group that we needed to have a passion project—something our employees could rally around in addition to their daily work. We wanted it to involve women business owners and support them.

We were very fortunate to have the support to be able to start our own agency, but we recognized that many are not as fortunate. At that point in time, women-led companies were only receiving 2% of venture capital funding.

CPG FYI: What are some of the obstacles women face when trying to start CPG companies?

Snyder: Through our interactions with other women business owners, we realized they felt ill-prepared with their business pitch and delivering it when they were going for funding. I think when they started receiving questions, they didn’t have that confidence that maybe a male might have in that same situation.

This led us to think about the opportunity of a pitch competition. We want to enable them to have the practice and positive feedback to bring to their pitch so they feel empowered and confident that they have a well-thought-out business plan, a viable idea and a great structure set up for success.

Snyder: We held it in New York City at a WeWork event space with stadium seating. There were about 100 to 150 people present, and more than 40 applicants. After a review by our panel, we whittled that down to five who were selected to pitch.

CPG FYI: Who were the two winning entries?

Snyder: The first-prize winner was Effie Panagopoulos, whose spirit product is called Kleos. It contains Mastiha, which is derived from the resin of a tree that is only found in a certain region in Greece. It has a fabulous taste. Effie walks around with a bottle of Kleos in her purse and she’s like, “Here, try some.”

The second-prize winner was Jen Pelka from Une Femme, which is an incredible champagne. She was part owner of a bar in New York City that, as a result of COVID-19, has since gone out of business. We’ve been working to help her develop the Une Femme brand and support her where she needs it.

CPG FYI: How will the Nov. 10 virtual pitch competition work?

Snyder: This year, we have to be creative like everybody in this new normal. We’re asking all our applicants to send a video pitch of their product. During the competition, we’ll view the top five contestants along with the judging panel. The contestants will be available live to answer the judges’ questions. Then we will [go] into breakout rooms, where the judges will decide who will be our first- and second-place winners. Then we’ll reconvene to announce the winners.

On our foundation website we have stories about how to craft your video. We want to help and encourage participants to put in their applications. Anyone who’s on the fence, we just want them to take a chance. Reach out to us, and we’ll help walk you through the application process.

Editor’s note: Following this interview, due to the rigors of the pandemic work environment, Enthuse Foundation decided to make it easier to enter the Nov. 10 competition. Instead of a pitch deck and video, the video part of the application is now optional.