In Orwellian World Of TV, 'True' Is False 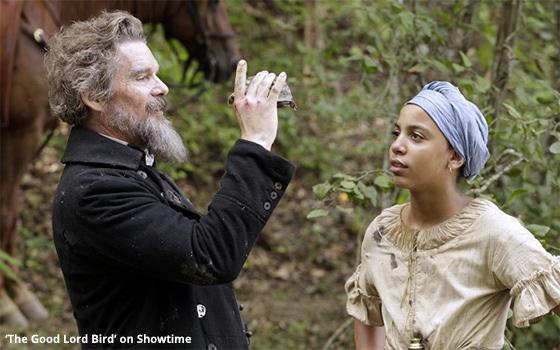 Two new scripted dramas premiering a week apart are positioned as “true story” narratives, but TV’s version of “truth” turns out to be quite different than yours or mine.

In fact, TV’s truth is often not really true at all -- or at best, maybe a little.

The two shows in question are “Fargo” -- which started its fourth season last Sunday on FX after a long absence -- and “The Good Lord Bird,” a seven-episode limited series premiering this coming Sunday night on Showtime (at 9 Eastern).

“The Good Lord Bird” is a John Brown story starring Ethan Hawke (pictured above) as the abolitionist firebrand of the 1850s.

It is adapted from a well-regarded 2013 novel of the same name by James McBride, who serves as an executive producer on the TV series.

The Good Lord Bird is a novel, and therefore it is a work of fiction -- even if it is based on real people such as Brown, and real events such as the raid he staged on a U.S. military arsenal in Harpers Ferry, Virginia (later West Virginia) in 1859.

As the TV series opens, however, we read these words on the screen: “All of this is true. Most of it happened.”

But wait a minute. How is this miniseries “true” if it is based on a work of fiction -- albeit a work of fiction based on, or at least inspired, by fact? Is it then just partially true? And if so, which parts?

Then there is the second half of that onscreen statement: “Most of it happened.” Huh? Which parts happened and which parts did not?

Does this sentence indicate that most of what we will see in this show was “true,” but some not? And if that is the case, how can you start out by saying that “all of it is true.”

Truth is nothing if not elastic to our makers and presenters of television content.

A case in point: The current season of “Fargo” starring comedian Chris Rock in a dramatic role as an African-American crime kingpin in Kansas City, Mo., in 1950.

I went in search of the “true story” of the character he plays, a man named Loy Cannon, and the challenges that his black criminal organization faced from a rival Italian-American crime family and could find no such story.

And yet, like the three previous seasons of “Fargo” on FX, this one also states with great seriousness that it is “true.”

“This is a true story,” says this statement, which is first seen onscreen well into the first episode of the new “Fargo.”

“The events depicted took place in Kansas City, MO, in 1950,” it continues. “At the request of the survivors, the names have been changed. Out of respect for the dead, the rest has been told exactly as it occurred.”

Never mind that no evidence can be found online that the story and characters seen in this new “Fargo” resemble real events or real people in any way.

The real hubris of this on-screen statement lies in its use of the word “exactly,” as in “exactly as it occurred.” That is quite a claim to make -- insisting that a story being told in a work of multi-episode cinema made for television is being re-created “exactly” as it happened.

It is quite a claim because it is impossible. Perhaps these “true story” claims that are made each season on “Fargo” are intended to be a joke of some sort indicating that we are not really supposed to take this claim seriously in the first place.

What is the truth of these “true story” statements? The truth is, I have no idea.