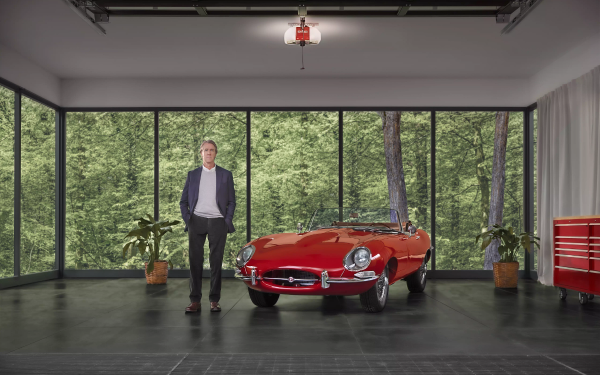 The campaign promotes LiftMaster as the first garage door opening system with an integrated camera and two-way audio communication.

The creative, developed with agency Schafer Condon Carter, recreates the scene with Frye planning to take a spin in his father’s classic sports car with two teen pals. However, while the1986 movie shows Frye actually being able to take the car out for a joyride in downtown Chicago, the hijinks in the ad are thwarted thanks to the new technology in the LiftMaster Secure View Garage Door Opener. Ruck, playing the dad role in the spot, reminds the boys he is watching them.

“When I stepped into the Frye Family garage that LiftMaster recreated from the movie, I had flashbacks,” exclaims Ruck. “I think LiftMaster picked the perfect iconic garage scene to demonstrate how Secure View and smart access solutions can provide peace-of-mind for homeowners.”

SCC first started thinking about “iconic” garages, such as Indianapolis Motor Speedway, airplane hangers, Jay Leno’s garage before selecting the garage scene from the John Hughes classic, and an all-glass garage precipitously overhanging a ravine and partially surrounded by trees.

Denny Hebson, Chief Creative Officer, SCC notes there was a “slight” pause as everyone in the room considered the Ferris idea. “And an idea was born,” he jokes. “We were going to update the famous garage scene in the movie where the boys take the dad’s sports car. Only it was going to work out a liiiittttle different this time.”

SCC built a replica of the iconic garage in an Los Angeles studio and green-screened in the treetops to look like the movie. “We studied the shots, the angles and the lighting of Tak Fujimoto, the film’s original director of photography.” The agency also secured the rights to the original soundtrack song “Oh Yeah” by Yello. “But most importantly we hired Alan Ruck,” states Hebson.

“He is the surprise who ties it all together. As the actor who played a young man who had once caused his father’s rare sports car to plummet into a ravine, of course Alan would want to protect his son (and his rare sports car) from a similar fate.”

He was the “only actor” who could have appeared in this commercial. Interestingly, the LiftMaster Secure View smart garage door opener is the only product that could have too, believes Hebson. “That is the sign of a great spot.”

The ad will appear nationally, on TV, digital video and social media.

A second spot shows the benefits of in-garage delivery, where Rusk is able to observe his packages being delivered while he's away, another key feature of the “myQ” enabled LiftMaster garage door openers.