Will This Idea Fly? The LG Wing Swivels Into Position, With Second Screen Below 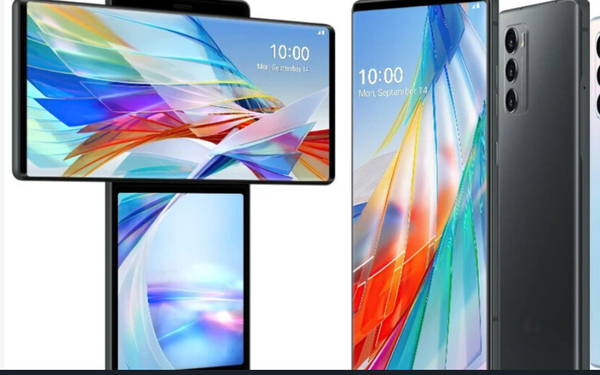 The smartphone industry seems hellbent on the idea that dual screens, like Samsung and Motorola’s folding phones, are the future.

From a marketing perspective, why not? Every conventional smartphone looks like the other one, and consumers seem to be suffering category ennui.

The new LG Wing might perk things up with a different idea. It has a 6.8 inch screen that lifts up from the main body of the phone and swivels into a horizontal position, revealing a second smaller (3.9 inch) screen in the vacated stem space.

That helps create some useful features that LG says makes the Wing good enough to shoot a professional video with one of the three cameras. If nothing else, the part of the smartphone that isn’t on the swivel creates a handle that makes shooting video a lot easier  -- and a Gimbal Motion Camera keeps video from bouncing around.

The smaller screen can be used independently of the big, wider one, so a user could be watching a video up top and working on (or watching) something else on the smaller screen below.  And it seems to be useful for gamers.

From a marketing standpoint, it may seem harder to describe with words, though LG’s online videos do a good job.

“Yes, it's weird,” wrote Lyn La in an early preview on Cnet.com, but she then added, “It’s not as crazy and useless as you may think.”

But buying a new Wing will cause $999 to fly out of your bank account (the Samsung Galaxy Fold costs about twice that much), which might ground interested consumers.

The phone was introduced by Korean electronics firm LG in mid-September. Its U.S. availability wasn’t clear until Wednesday, when Verizon said it would begin accepting orders Oct. 1 for delivery Oct. 15, with a variety of discounts.

AT&T and T-Mobile will package their own deals. LG has a 10% share of the U.S. smartphone market, a distant third behind Apple and Samsung, according to Counterpoint, an electronics research analysis firm. But LG does not have the brand cachet of either of its rivals.

Price could be the most unattractive feature consumers might encounter — a fact Samsung learned when it introduced its $999 Galaxy S20 just as the pandemic began getting a grip on the U.S. and the world. Consumers were being careful about money, but at that point it was also just about impossible to physically shop for a smartphone through wireless dealers, who had closed up shop.  In its Q2 reports, Samsung said year-to-year sales fell 20%.