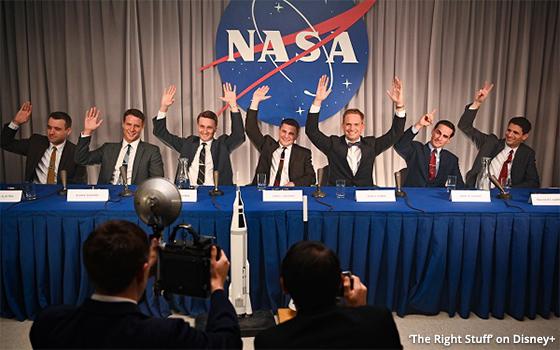 Somebody made a TV miniseries about the space program and Ron Howard and Tom Hanks had nothing to do with it.

Everyone knows that when it comes to movies and TV shows about the space program, these two always had the right stuff.

But somehow, a new made-for-TV version of “The Right Stuff” has been produced for Disney-owned National Geographic -- and, hence, Disney+ -- without them. Oh, well, maybe this torch has been passed to a new generation.

For this new “Right Stuff,” NatGeo partnered with Warner Bros. Television and Appian Way, a production company whose luminaries include Leonardo DiCaprio. Take that, Tom Hanks!

This TV version of “The Right Stuff” takes eight installments to tell the story of the first seven Mercury astronauts of the U.S. space program.

It is a tale told previously under the same title in a 1983 movie running for three hours and 12 minutes, and before that, the original non-fiction book by Tom Wolfe, published in 1979.

With this new one, we are moving farther and farther afield from Wolfe’s book, which was the first to bring the phrase “the right stuff” to the attention of millions.

Disney’s new “Right Stuff” is based primarily on the old movie, according to the credit sequence at the end of Episode 1.

Thus, what you get with this new “Right Stuff” is a TV version based on a movie based on a book. The result is a typical TV production that you might describe as “a mile wide and an inch deep” (to borrow a cliché).

This is not meant to condemn this new TV series, but for those of us old enough to remember the first time we read “The Right Stuff” and then saw the movie a few years later, this series will pale in comparison.

Having said that, those former versions are now around 40 years old, which means that many people alive today have had no exposure to either of them. These younger people comprise the very group for which this “Right Stuff” has been remade.

The mere fact that anyone has taken up the task of remaking “The Right Stuff” for a new generation of Americans serves as another reminder that if you live long enough, you might eventually see every movie or TV show that ever meant anything to you get remade -- and rarely for the better too.

“The Right Stuff” starts streaming on Friday (October 9) on Disney+.