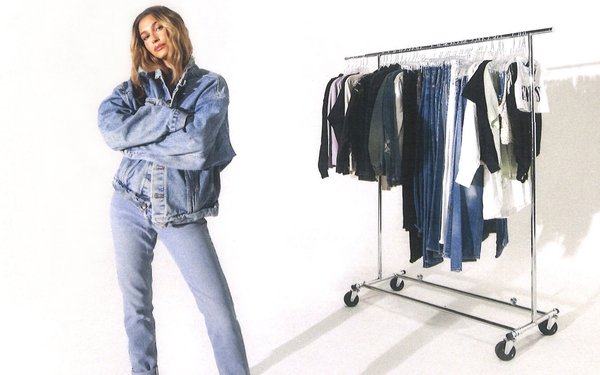 Denim is a dirty business, and in its latest effort to clean up the blue-jeans world, Levi's is launching a global buy-back program. Called Levi's SecondHand, it aims to create a circular marketplace for its biggest fans.

Many retailers sell used clothing, making the secondhand market the fastest-growing sector in apparel. A study from Raymond James, published early this year, finds that 18% of U.S. shoppers -- and 21% of women -- are buying used clothes, up from 15% last year.

But Levi's says this is the first secondhand program of its kind from a global denim brand. Consumers can drop worn jeans and jackets off at Levi's stores, getting a gift card for a later purchase. The San Francisco-based company says it is offering between $15 and $25 for denim that can be resold, and up to $35 for vintage. If the denim is too worn for resale, customers still get a $5 credit.

Clothes sold in the SecondHand marketplace are priced between $30 and $100.

Levi's, which has made sustainability a key corporate issue, says that buying a used pair of jeans saves about 80% of carbon dioxide emissions and 700 grams of waste compared to buying them new.

The apparel business remains one of the worst polluters, producing about 5% of greenhouse gasses. Clothing production has doubled in the last 15 years, the company says, with people wearing clothing for shorter periods. And while many brands and consumers have tried to do better, less than 1% of the world's textile waste is recycled into new clothes.

"Our belief is that you should love what you wear and live with it longer," says Jennifer Sey, the company’s CMO, in the announcement. "Make sure you really love the things you buy. And what could be better than a perfectly worn-in pair of Levi's jeans?"

Separately, Levi Strauss reported that its revenues dropped 27% in the third quarter, falling to $1.1 billion as COVID-19 closed many of its stores. A 52% jump in its ecommerce sales partially offset the decline. The quarter's net income came in at $27 million, compared to $124 million in the comparable period a year ago.

In announcing the results, Chip Bergh, president and CEO of Levi Strauss & Co., says it continues to focus on "elevating our already iconic brand, investing in digitization, and accelerating our efforts to diversify across geographies, product categories and distribution channels, including doubling down on our fast-growing direct-to-consumer business."

He says those investments are already yielding results: "Our total digital business has doubled as a share of total net revenues, and Levi's remains the global leader in denim, where our women's business continues to take market share."