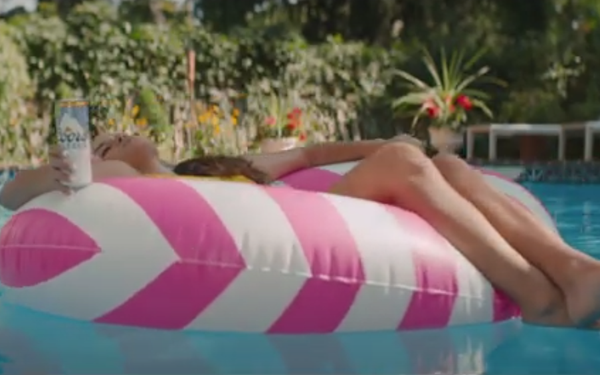 Marketers probably realize by now that consumers -- especially younger ones -- appreciate a brand that commits to a cause, but they also can spot when a product is just jumping on a trendy bandwagon. You may know the line: “Sincerity: if you can fake that, you’ve got it made.”

New Coors Seltzer, launched last week, is hitting that perception head-on, dubbing itself “Seltzer with a mission,” and promising that because it's partnered with the environmental  program Change the Course, just drinking Coors Seltzer will help clean the water in 16 river basins.

While the idea seems high-minded, the campaign is anything but, deliberately. A new spot called “The Sacrifice” show drinkers, none of whom seems to be much over 25, having a great time drinking Coors Seltzer, while they party on a rooftop, play video games, or camp out in the shadow of a beautiful mountain range.

“I’ll lay here all day if I have to, for the rivers,” says a chill young woman vegging on a swimming pool raft, a can of the seltzer dangling from her right hand.

If you’re not part of the solution, this campaign seems to be whispering, you’re just not drinking the right seltzer.

Coors says for every 12-pack sold, Change the Course will get a cut, with the Coors goal of restoring at least one billion gallons of water in the first year. The water organization, part of the Bonneville Environmental Foundation,  puts together corporations that want to help nonprofit organizations -- 45 so far -- working to fix waterways problems It is supplying funding for 91 projects in 16 states.

“More and more people are looking for a refreshing hard seltzer, just as more people are also looking for ways to help the environment,” says Matt Lafferty, marketing manager for Coors Seltzer. The brand started the “easiest volunteer program,” offering a free 12-pack to consumers who sign up to “help save the rivers.”

Coors said  that the seltzer brand is donating $1 million in the first year, and its partnership with Change the Course is open-ended.

And what does Coors consider “restored water”?  According to a spokeswoman, “The amount of water we count as restored is equal to the amount we’re able to keep and or replenish to the river through various projects, including cleaning up river sites, restoring riverside habitats and improving irrigation efficiency for river flow enhancement.”  The results are verified, she says.

That sounds serious enough. But the ads don’t  --  and apparently that’s not going to change. “The brand believes that having a serious mission and purpose doesn’t mean that you have to use a serious tone of voice to communicate it,” the spokeswoman said. “The brand needed to explore other ways in, to encourage behavior change and to empower people to take action.

Coors, however, does make it plain that its cause-oriented angle is something other seltzer-makers aren’t doing, in much the same way Coors Seltzer’s four flavors are a distinguishing characteristic compared to other brands’ flavors. It is, essentially, positioning itself as the only major-brand hard seltzer with a social conscience.