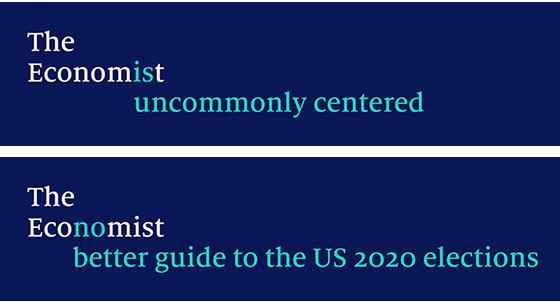 The Economist is launching a new digital ad campaign to drive U.S. readers to its 2020 election coverage.

Though a global campaign called “Word Play,” the ads primarily target an American audience and will run across social media and The Economist’s owned channels.

It will also run on other digital media properties, such as Wired, The Wall Street Journal, The Washington Post, HuffPost and Quartz.

In addition, the campaign will be featured as host-read ads on a range of politics and current-affairs podcasts.

“This year, Americans are anticipating one of the most consequential elections in U.S. history, against the backdrop of a global pandemic and social unrest,” stated Kim Miller, Chief Marketing Officer of The Economist.

“Through ‘Word Play,’ we can introduce our brand and content to new audiences looking for a global perspective on the events shaping our world today and begin to bring them on a journey with us,” she added.

The last time The Economist launched a U.S.-targeted digital ad campaign was during the midterm elections in 2018. The Economist hopes to pique the interest of new readers, including younger, female audiences, with this campaign.

“Tapping into the collective frustration with mass media and acknowledging the emotionally charged presidential election, ‘Word Play’ will promote The Economist’s U.S. 2020 elections coverage, raise awareness of The Economist among U.S. audiences and present the brand as a refreshingly fair-minded, rigorous and data-driven alternative source of journalism,” according to a statement from the company.

Creative makes use of kangaroo words found within The Economist name - such as “No hype,” “On the most consequential election of our time” and “No clickbait.”

The campaign was created in collaboration with Brooklyn-based creative agency Superlative.

It launched its first presidential election forecast model in June, and earlier this year debuted the “Checks and Balance” newsletter and podcast.

The Economist has a combined print and digital circulation of over 900,000 in North America.