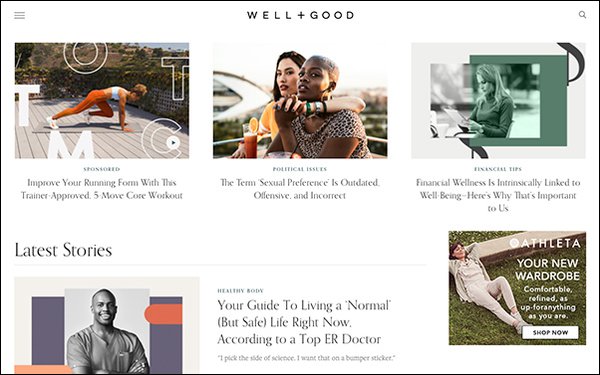 The health and wellness digital media brand now reaches more than 250,000 subscribers on YouTube. Across all platforms in 2020, Well+Good claims over 42 million video views.

“By the end of the year, we will be close to triple-digit millions,” Kate Spies, general manager of Well+Good, told Publishers Daily.

She noted video is a key "an incredibly important part of our content footprint and has become a gateway through which many people discover our brand for the first time.”

YouTube is the focus of its distribution, but the videos also are available on the Well+Good site and its social accounts.

The publisher has partnered with actor-activist Sophia Bush for the launch of a new video series called “Need to Know.” The series will cut through the confusion surrounding COVID-19 and interview health experts to answer questions about the pandemic from the Well+Good community.

Bush will also release an extended conversation with each expert on her podcast, “Work In Progress.”

“Need to Know” will tackle additional topics in the coming months, such as the 2020 election, climate change and reproductive health. It  joins “Zoe Tries It All” and “Cook With Us” as new series Well+Good added to its video roster this year. Episodes run around 10 minutes long.

Video “became a much bigger focus of ours” at the beginning of 2019, Spies said, when “wellness as an industry grew.”

While wellness content has “exploded,” Spies said Well+Good is unique because it covers its core verticals of fitness, food, lifestyle and self care from a wellness perspective.

“There was a white space for a bigger wellness brand to come in and holistically offer video solutions for various different verticals within wellness," she said.

It took about six months of ramping up creative and production, but in the last 18 months, Well+Good’s video has “seen exponential growth.”

“We felt like it was an incredibly good time to launch a series like [“Need to Know”], designed to cut through overwhelming and massive information about important topics,” Spies said.

The company is also in “active talks with a couple different brands” on sponsoring the new series.

The plan for Well+Good going into 2021 is to begin “auditing our video series,” Spies said. The company will cut the series that are not performing well, and double down on ones that are.

Three new launches are also planned, including a series on plants.

The company is looking to expand its video distribution beyond social media and its owned-and-operated platforms, including OTT and more co-branded content.