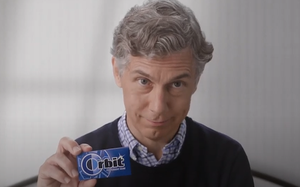 If things have gotten too dirty in the world of dating apps, who better to help clean it all up than a presumably “well-meaning” dad?

In a 60-second spot from BBDO titled “The Talk”—directed by Paul Briganti, whose credits include “Saturday Night Live”—Parnell sits on a bed and delivers what older generations would recognize as a discussion about the facts of life.

“Like your body, the internet is full of new and exciting things you don’t understand. It just feels like things have gotten a little dirty,” he says.

“Sending late-night messages like ‘u up?’ And don’t even get me started on all the not-so-tasteful photography.”

Holding a pack of Orbit, he goes on to admit that he’s no saint—having “sent a naughty fax or two. Guilty!”

Accordingly to Orbit senior brand manager Sally Tran, dating etiquette has taken a turn for the worst since the days when a parent would deliver a “birds and bees” lesson.

“You’ve got ghosting and people sending eggplants and emojis and peaches all over the place. We thought it was a good opportunity for our brand to come in and try to help clean up what has become a very dirty dating world,” Tran tells Marketing Daily.

Parnell was chosen because he “fits the concept of being kind of America’s dad. That very well-meaning but maybe slightly out-of-touch kind of guy,” says Tran.

“What we’re finding is people are spending more time on the apps before they meet up, so they’re having more intimate, longer types of conversations than they might have had in the past,” says Tran.

Aside from the video spots running on digital platforms, Orbit is getting its message out by enabling Tinder users to use the app’s chatbot to send video responses from Parnell to all sorts of queries.

It’s a digital-only campaign given the youthful target audience, according to Tran. “We decided not to do television. We want it to come across to consumers that we are a part of their conversation, not that we’re talking to them.”