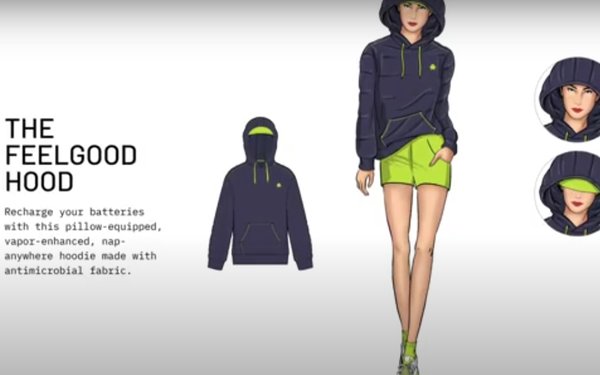 Pandemic aside, this is the time of year the flu begins its new season.

This year, Mucinex is encouraging you to dress for it.

But now, aiming to establish itself as a “holistic health and wellness brand,”  it is launching Sickwear, six gender-neutral clothing items from designers Steven Alan and Christina Viviani.

This is outfitting for a more stylish flu, far slicker than the sweatpants and ratty sweater that’s more typically worn during an illness.

A Sickwear fashion show will be live-streamed on YouTube on Tuesday night, modeled by what the brand claims are a band of YouTube creative disruptors. The clothes will be sold for prices ranging from $46 to $140, which the brand says are discounted prices, and then on a separate website until it’s all gone.

“Making of Sickwear" details the ideas behind the collection. The designers kept in mind the kind of dead-on-your feet needs of people who are sicker than a dog, but also want to look good.

The blue silk Zzzimono wraparound has two pockets, Clean and Dirty, to keep your tissue supply organized. It comes with a neck pillow and eye-mask whose fastener accommodates a pony tail.

On the back of the kimono is a large silhouette of the Mucinex brand’s Mr. Mucus, whose blobby likeness shows up elsewhere in the collection in smaller versions.

“The Slumpsuit” is a lot like a jump suit and hoodie in one, with some important details for the flu-forlorn.

“We realized we could put a kind of waist zipper on it so you could actually go to the bathroom without having to take off the whole thing,” explains Viviani in the video. A tissue pocket is designed with a narrow slit to make the tissues pop up like a good box of premium-priced Puffs.

“The Feelgood Hood, I wanted it to be super-cozy,” explains Alan, “kind of like a stretchy blanket.” The hoodie has a pillow-like design and a pull-down eye mask. An aromatherapy pocket is built into the arm at a place it would likely be close to a snuggled person’s face.

Mucinex seems to be taking this Sickwear idea more seriously than just a limited one-off.

“This entirely new concept in clothing comes from the innovative business mind of Cynthia Chen, president, North America Health at RB, whose keen insight into consumers has always guided her to the belief that in order to feel good, it helps to look good,” according to a press release.

Does Mucinex intend to keep Sickwear going? A company spokeswoman didn’t return a call, but elsewhere RB describes Mucinex as being a leading OTC brand that is embarking “to activate a robust social commerce business strategy”  through “a series of innovative partnerships and unexpected social activations.”