Under GOP Attack, Twitter Retreats On Hacked Materials Stance... As Russia's Use Of Giuliani Provides Backdrop 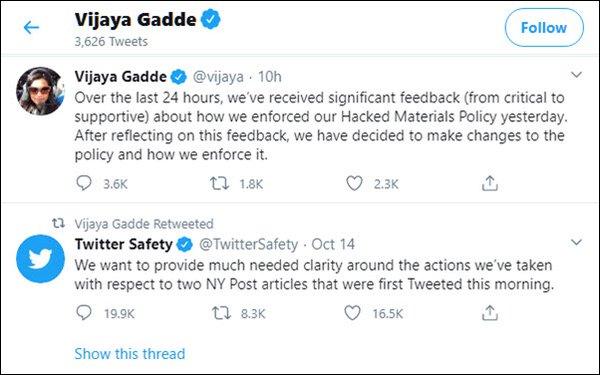 The GOP’s battle to stop social media from limiting conspiracy theory content and other right-leaning misinformation took another series of turns on Thursday.

On Wednesday, moves by Twitter and Facebook to limit distribution and flag or roadblock an unverified New York Post article about Hunter Biden — which was based on a purportedly hacked email purportedly “discovered” in a hard drive in a computer repair shop and passed to Rudy Giuliani's lawyer — prompted howls of outrage from Republicans.

Trump used his usual channel, Twitter — apparently without irony — to express outrage at Twitter and Facebook and demand again that Congress repeal Section 230 of the Communications Decency Act, which protects online companies from liability for their content decisions.

Also in reaction to the Post brouhaha, Republicans on the Senate Judiciary Committee subsequently vowed to vote next week to subpoena Twitter CEO Jack Dorsey to appear before the committee.

Vijaya Gadde, Twitter’s legal, policy and trust and safety lead, then tweeted an announcement (above) that, after receiving “significant feedback” on its Post article decision, Twitter will be amending its hacked material policy. The company had cited a rule against publishing material obtained through hacking as one of its reasons for roadblocking the Post article.

The changes: Twitter will cease removing hacked content, unless it is directly shared by hackers or those acting in concert with them; and it will label tweets to provide context instead of blocking links from being shared on Twitter.

However, Gadde said that all other Twitter policies around hacked materials will continue, including the one prohibiting users from posting private information without consent — which means that the Post article, which contains images that include email addresses and phone numbers, will still be blocked.

Adding even more layers to the scenario, Trump-appointed Federal Communications Commission Chairman Ajit Pai announced that he will try to take charge of Section 230 by  launching a proceeding to “interpret” and “clarify” the law — an intention that met with immediate protests from the free-speech advocates.

While Democrats have also called for more government oversight of social media, some say that moves to expand social platforms’ content liability should be approached with moderation.

“The reform of Section 230 should be done with a scalpel, not a meat ax,” Senator Richard Blumenthal (D-CT) told reporters on Thursday, reports Bloomberg. Blumenthal also accused  Republicans of trying to use subpoena power as a political tool to intimidate social platforms from curbing misinformation leading up to the election.

Meanwhile, as the Giuliani-linked Post article generated growing controversy, The Washington Post reported that U.S. intelligence agencies last year warned the White House that Giuliani “was the target of an influence operation by Russian intelligence."

While in Ukraine in 2019, was fed false information about the Bidens by Russian intelligence, meant to be passed on to Trump.

The Russians fed misinformation to Giuliani while he was in Ukraine trying to gather information to support the repeatedly investigated and repudiated premise that Hunter Biden and his father, former Vice President and Democratic Presidential candidate Joe Biden had engaged in corrupt behavior relating to that country, according to the report.

In a side development, also on Thursday, Giuliani's daughter, Caroline Rose Giuliani, published an opinion piece in Vanity Fair urging everyone to go out and vote for Biden and his running mate, Kamala Harris.