With 'Closer To You,' Nordstrom Looks To Redefine Omnichannel Strategies 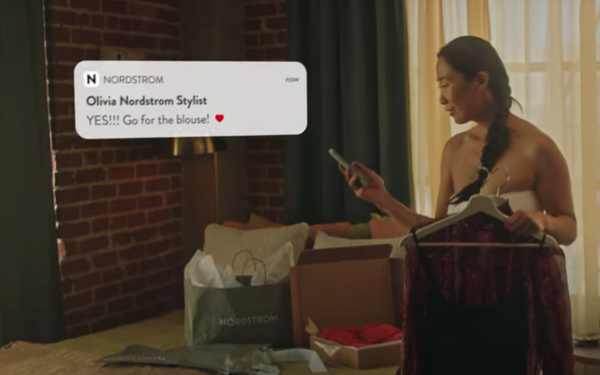 To win back the reluctant American clotheshorse, Nordstrom is reinventing its fashion playbook. A new campaign, "Closer to You," shows shoppers more ways to rely on digital elements for their sense of style, even linking the once-separate worlds of Nordstrom, the high-end retailer, and Nordstrom Rack, its off-price chain.

The Seattle-based retailer has long offered styling services in-store. This new effort makes it clear that anyone can access stylists -- online or off -- whether for quick fashion advice or a whole new wardrobe.

Offers include a free 30-minute video call with a stylist, followed by outfit recommendations and personalized style boards.

The new offerings include product-page videos, with stylists offering advice on fit and style, and the ability to browse “Looks."

A quiz lands consumers in the Nordstrom Trunk Club, which -- using the kind of artificial intelligence and data science that powers brands like Stitch Fix -- provides head-to-toe outfits to try on at home. Customers keep what they like and return the rest without paying a fee or having to pay for a subscription.

For those who prefer working with stylists in real life, the brand reiterates its commitment to safe social distance practicing once inside the store.

The new effort emphasizes Nordstrom's commitment to giving customers the "product you want, in the place you want, served in the way you want," says Red Godfrey, vice president of creative, in remarks at the Fast Company Innovation Festival. "This campaign translates that strategy into a focus on convenience and connection."

Godfrey says Exposure, the brand's agency, helped come up with the idea back in January. And while the company questioned the premise once the pandemic hit, it now thinks it's more on-target than ever. "People are craving connection and are reflecting on who they are," she says. "We want to be there for them and facilitate that by offering everything we have, digitally and physically."

Separately, the company announced that customers can use Nordstrom Rack locations as order pickup spots for all Nordstrom.com orders. And starting later this year, it will also allow Nordstrom Rack customers to retrieve orders at full-price Nordstrom stores, as well as its neighborhood hub spots.

In its most recent quarterly results, Nordstrom says second-quarter sales dropped 53% from the previous year. While much of that decrease was due to store closures fueled by COVID-19, it also reflects a shift in the Nordstrom Anniversary Sale's timing from its usual second quarter to third quarter.