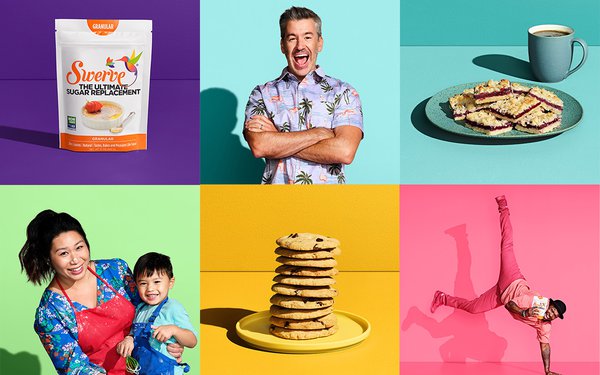 Why shouldn’t increasing calls for societal inclusion apply to dietary preferences as well?

It comes amid the continued rise of sugar replacements and changing consumer preferences for food and beverage ingredients.

The campaign from the Seattle agency DNA positions Swerve as the “Everyone Friendly” sweetener. That’s a nod to the products’ zero-calorie, zero-carb, plant-based, gluten-free and keto-friendly status—among others.

“The genesis of ‘Everyone Friendly’ was rooted in the idea that there are just so many eating niches out there,” Swerve CMO Andy Armstrong tells Marketing Daily.

“We had the insight that it was really difficult to bring everyone around the table with a lunch or dinner, holiday meal, et cetera. But what everyone has in common is they all want something that tastes good.”

There are no voices in the 15-second commercial for New Orleans-based Swerve — just images of people enjoying treats and dancing to the superimposed text, “Tastes like you didn’t give up sugar friendly.”

Besides running on digital platforms, campaign spots appear on Hulu, according to DNA senior supervisor Nicole Schmidt. Other venues include Bon Appetit, where “we worked with three guest recipe creators who have all used Swerve and created unique recipes” that are posted on the site.

Additionally, “We had a collaboration with Pandora [radio] to do six or seven unique [audio] spots.”

As public interest in sugar substitutes like agave syrup and stevia-derived offerings has increased, high-fructose corn syrup has been facing headwinds. It has risen above sodium/salt, saturated fat, trans fat and cholesterol on the list of what people are avoiding or decreasing in their diet, according to research firm The Hartman Group.

According to retail data from Nielsen, dollar sales of sugar substitutes with natural ingredients increased almost twice as much as those containing artificial ingredients—13.6% and 7.2%, respectively—in the 52 weeks ended Oct. 10.

The biggest gainer was the natural sugar substitute monk fruit, up 142.6%.

Coinciding with shifting consumer tastes has been industry consolidation.

One of the more prominent examples was the acquisition this summer of PureCircle Limited of Chicago—the world’s leading producer of plant-based stevia sweeteners and flavors—by Illinois-based, global ingredient provider Ingredion Inc.

Ingredion is a major supplier of high-fructose corn syrup that offers a wide variety of non-GMO sweeteners.

Last year, PureCircle’s reputation began to suffer due to the surfacing of accounting irregularities following an audit by PricewaterhouseCoopers.

In an earnings call with financial analysts in August, analyst Robert Moskow from Credit Suisse.Ingredion asked president and CEO Jim Zallie about the PureCircle acquisition.

“It's no secret that PureCircle had a very difficult 12 months prior to us acquiring the business -- and especially the reputation with customers, because the business had been hampered for about 12 months with a lot of uncertainty, and that uncertainty spilled over to its customers,” said Zallie.