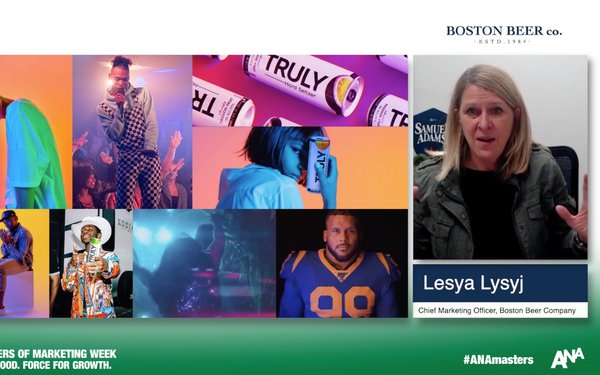 If you ask Lesya Lysyj for an important ingredient in the success of the Boston Beer Co, she will tell you it’s operating on the fly and with a lot of intuition.

The chief marketing officer at the pioneering brewer of Samuel Adams and Truly Hard Seltzer,  she’s held some top jobs at Welch’s, Weight Watchers, Mondelez and Heineken, which “I like to call normal companies.”

At her presentation at the Association of National Advertisers’ Masters of Marketing Week virtual seminar on Friday, Lysyj said those companies resembled cruise ships, with “a steady pace, a lot of compartments. They’ve got a lot of people. They’ve got order.”

But Boston Beer? On the screen, a picture of a big cruise vessel was replaced by a pirate ship. Lysyj said Samuel Adams’ parent encourages employees to  “discuss the undiscussable. That  sounds small, but I think we all know of, or are at, places now where it’s not always safe to speak your mind.”

Lysyj thinks that fast-paced, unbuttoned-down corporate ethos helped the company when the reality of COVID-19 closed down the country nearly overnight. While other companies scrambled to figure out what to do next, “I think at Boston Beer we didn’t have to adapt too much, because our culture feels like that every day.”

Within 48 hours, Sam Adams had started a relief effort for bar owners and workers, and an ad campaign to publicize it. Within a week, the fund had grown, and founder Jim Koch had recorded different radio commercials  for 20 markets nationwide. The fund is now $5 million, she said.

The company has been thinking outside of the box since its founding by Jim Koch in 1984, when “craft beer” was an alien term and strange concept. Now there are something like 7,000 craft brewers, and with all those new brews, Samuel Adams has lost a little luster. Lysyj told the ANA audience the company needs to “build brand relevance” with younger drinkers.

Its unorthodox product has led to an unorthodox corporate culture. In her presentation, Lysyj showed a pastiche of corporate scenes, nonchalantly telling her audience, “That’s Jim in a vat of beer several years ago.”

As Lysyj said, the company sometimes makes decisions instinctively. In 2016 Boston Beer started Truly Spiked and Sparkling Seltzer, believing that its market would be mainly women. But when the company realized the beverage's appeal was far broader than that, it quickly pivoted to de-emphasize the more feminine-skewing aspects of the drink. It revamped packaging and graphics, and eliminated some of the more flowery adjectives describing flavors.

Now Truly is the second-best-selling hard seltzer, behind only White Claw, also started by a small company that took a chance on a basically unknown market.  Lysyj said Truly is the only one of the top seltzers whose sales are still growing. That’s no small feat because, she said, 52 new seltzer brands have been introduced in just the last eight months. The success of Truly has helped propel net income 81% higher than a year ago. For the first time, Boston Beer stock went over $1,000 a share on Friday, up 14%.

Lysyj later modified her analysis of the rapid decision-making that typifies life at Boston Beer with the acknowledgement that even though those decisions get made fast, “we actually do a hell of a lot of testing” once the idea is hatched. “So that there is this odd dichotomy,”

Bottom line, it seems she’s willing to rethink that, too. Asked by Bob Liodice, ANA CEO, to leave her audience with just one piece of advice, Lysyj responded quickly, “My advice would be--underanalyze.”  Marketers torture themselves trying to figure out the way the winds are blowing, but, she said  “most of the time you already know the answer.”

Correction: This version has been updated from an earlier one that incorrectly described the origins of the Truly brand and how its name evolved from Truly Spiked & Sparkling Seltzer to Truly Hard Seltzer.